The walnut business is on pause for a couple of reasons. One is that I am having my upper wisdom teeth removed. I cunningly used the scheduler to launch this post even as it happens. The other reason is that the tub I used to dehull the nuts burst and I need a replacement.

These nuts are from named cultivars so they might average 30% nutmeat from the dried nut sans the hulls. I might get three or four pounds of nut meats from this load.
That is very high-end foraging. Three pounds of nuts is about 12,000 Calories. My back-of-envelope calculations are that a "subsistence" farmer/forager needs to average about 2000 net Calories per-hour-of-production.
That is a very crude number that makes a passing nod to the need to do other chores (like firewood, construction), the fact that their will be some people in the household who cannot do "field work". There will be times when the weather prevents being outside.
In a famine situation, any task that generates net Calories is worth doing even if it is far less than the threshold. The trick is to figure out which task(s) offer the highest net return.
While you can rightfully point out that getting them out of the shells is time consuming and is not considered in the one-hour, that can be done while it is dark outside and other chores cannot be done. Furthermore, the named cultivars were selected for smooth inner-shells that release the nut meats without resorting to having to mine it out of every convoluted sinus.
Black Walnut Resource 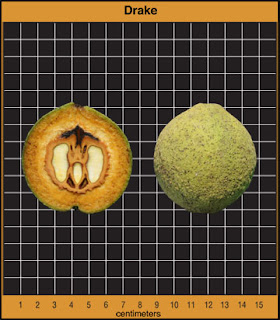 Flowering characteristics
You can click on the names of the individual cultivars and they will show you a cross-section through the nut to give you a feeling for the nut-to-husk ratio, the nutmeat-to-shell ratio and the degree of convolutions in the inside of the shell. I think it would have been more useful to section them perpendicular to the suture lines, but what do I know?
Cattle
I have a replacement but it is full of water out in the back paddock.
I moved the cattle to a fresh paddock and filled all of my "watering tanks" so they can be out there a week if needed. I will reclaim one of those watering tanks to use in the walnut enterprise as soon as I am feeling whippy.
I got nipped by the fence while filling the tanks and it was not a very impressive nip. That means I had a short somewhere. I get a lot of them when the bucks are in rut as deer of both sexes run into the fence.
Wire-to-metal-post is a hard short. It is a testament to the charger that I got buzzed at all.
While repairing the short I got bumped again. I forgot that the spark can jump. I had a knee on the wet ground and the jolt was more than a tickle. You know you are a farmer when you are happy when you get whacked by your electric fence.
Incidentally, if you happen to encounter one of these in your travels, the typical way to check them is to have a traveling companion go over it first.
If your traveling companion refuses, the other way to check it is to take a green grass stem or weed-stem that is about two feet long. Hold one end and touch the other end to the hot-wire. Then slowly slide the stem to shorten the distance between your hand and the wire. "Slowly" means about four-inches-a-second.
Humor 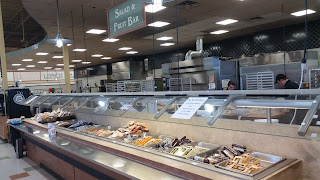 Read the sign and then look at the merchandise.
Posted by Eaton Rapids Joe at 12:00 PM