I had blisters on the bottoms of both feet from my efforts that blacktopped a portion of the driveway.

The ever-lovely-and-plucky Mrs ERJ and I picked up some walnuts. I wanted to save them for seed to plant at the hunting lease. They were collected from a mixed grove of Sparks 147 and Drake which should be a decent cross for both timber and nut production.

I got the blisters walking on the nuts to crack the husks to speed later processing.

The goo you see is the waste from the husking process.

Mrs ERJ "suggested" that I not husk the walnuts in the driveway next time.

These are Sparks 147 walnuts and they carry a LOT of husk for the size of the nut. 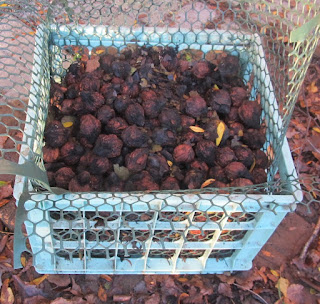 This was yesterday's production. Plenty for seed. Now to work on nuts for eating.

Jerry of Ducky-and-Jerry passed away last night. Mrs ERJ and I visited them in early August.

I don't know if there will be services. I do not know if/who will attend if there are services.

I just want to mention in passing that the secular, Gaia/Wicca belief that we become the-music-of-wind-blowing-through-the-branches-of-willow-trees after we pass is mighty thin gruel on which to weather hard times.

Posted by Eaton Rapids Joe at 8:50 AM