The drying rack is a work in progress.

The box is a salvaged unit that looks like a unit that cuts of meat were defrosted in.

The nuts are in live-traps to keep them away from squirrels.

My intention is to use cardboard to duct incoming air down the back and a box fan to push it back up. Then I can close the door and have it both squirrel-proof and fairly effective at drying.

The weather guessers think the relative humidity will stagger around between 65% and 90% over the next week. Not a lot of drying power but it will be plenty if I can keep moving fresh air through the nuts.

How far would you walk for 2.2 pounds of lard?

At 9 Calories per gram 2.2 pounds of lard or butter would net 9000 Calories. Walking on level ground uses roughly 100 Calories per mile so a first order approximation indicates that 90 miles would be a "wash" from an energy standpoint. Of course, every person uses slightly different amounts of energy.

The 2000 Calories-per-hour rule-of-thumb suggests that you let the opportunity pass if you cannot complete the round-trip in 4.5 hours or less. For most people, that suggests that if the 2.2 pounds of lard are more than 6 miles away (12 mile round trip) it might be prudent to pass on the opportunity unless you can ride a bike. 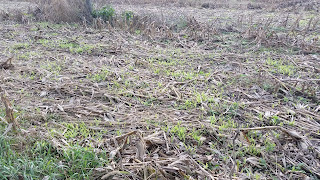 Several of my neighbors are farmers.
Earlier this year, the farmer took about four passes around his field before he noticed that the grain bin was not filling up.
It was all spitting out the back-end.
It took him weeks to get it fixed, at which point he finished harvesting the field.
The corn that spit out the back-end is now sprouting, which is how I was able to piece together the reason for his delayed harvest.
That was an expensive mistake.
Posted by Eaton Rapids Joe at 9:05 AM