Civil Wars: Is there anything we can learn from Northern Ireland?

Gardencountry, one of my readers, called my attention to an interesting essay written by Samuel Culper. The topic is the civil war (The Troubles) in Northern Ireland. This is one of the templates suggested for the unwinding that MIGHT happen here.

The map shown above is at the "Ward" level. Each ward is approximately 4000 people. Wards are smaller in cities and larger in rural areas.

The first observation, one that is very important, is that almost 25% of the area or 15% of the population had ZERO civilian deaths during The Troubles. Another 25%/15% had deaths at a level that was 10% of the highest rate Wards.

As might be expected, the very highest rates occurred in cities. But even there, there were many Wards with ZERO or extremely low civilian death rates. 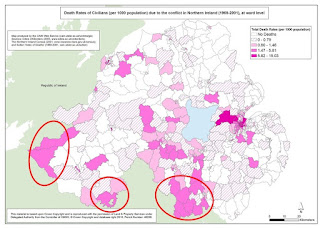 The areas that are circled in red are anomalies in that they are rural areas (i.e. large Wards in land area indicate low population density.

The general belief is that most of the violence was Catholic-on-Protestant. The anomalous areas had Catholic majorities and bordered (nominally Catholic) "Southern" Ireland.
A few possible hypothesis:
-Ethnic Cleansing. The case against is why THESE Wards and not the others with similar C/P ratios?
-Strategic importance. Presumably, these are Wards where weapons were entering the country and potentially being cached.
-Toxic relationship between Police State and residents. This hypothesis is not necessarily in competition with strategic importance hypothesis.
At this point, I strongly lean toward the "Strategic Importance" hypothesis for those Wards that have exceptionally high civilian death rates. That is also true for urban Wards.
The fact that a neighborhood might have high strategic importance means that there are many soft or exceptionally lucrative targets. Shipping, warehousing and tourism tend to be located in choke-points and be of historical, strategic importance.
Mapping that observation back to the United States, 2021...legacy cities like Chicago, New York, St Louis, New Orleans, L.A.-Long Beach and Washington D.C. have historically been of high, strategic importance and would be good places to avoid. For that matter, Orlando and Las Vegas would be good places to not-be due to the tourist angle.
Analogs to the circled Wards are harder to identify but borders that are porous to people are porous to weapons. The Rio Grande valley and the counties in N.M., AZ and CA bordering Mexico could turn into hell-holes.
Posted by Eaton Rapids Joe at 6:00 AM