I used to work in an automotive factory where the bodies were welded together from sheet-metal parts. Sometimes I visited stamping plants where it seemed like every press in the plant was running and the floor shook like a drum.

Those places were LOUD!

One thing I noticed is that the people who worked there were very adept at body language. I never got interrupted, for instance, when I was pressed for time and walking across the shop. They could tell by the slight differences in my gait and facial expression that it was not a good time to stop me.

That leads me to one of my "tricks" when reviewing videos. Turn off the sound and WATCH the body language. Words lie. It is much harder to lie with body language.

What I found most interesting was Harris's postures. 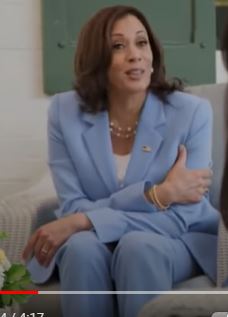 Most of the time she was in the fetal position which is very puzzling. Here she is, ostensibly the second most powerful person in America, in front of a friendly audience of five hand-selected sixth graders being lobbed pre-selected, soft-ball questions. The video crew is trying to make her look good and she still curls up like a pill-bug poked with a broom-straw.
Isn't that the origin of her "creepy" vibe? Her core body language radiates "I hate and fear people" while her words are a NPC subroutine running on the graphics card.
The crib notes that Putin, Xi, Mode and everybody else will be working from are that this person is EASILY bullied.
But that is not the scariest part
How does a person get to be fifty and still have this character trait?
From one perspective it is because they cherished and nurtured and guarded the pain of every perceived slight and indignity. Perhaps they think of it as the source of their power much like Samson's hair.
They have lists and hold grudges.
Don't fear the Hero-king
You can negotiate with the Hero-king. You can find common ground and fight common enemies.
Fear the craven imposter
The coward will stab you in the back out of fear that you might turn against them.
As a story-teller I wonder at the motives and competence of the people in the smoke-filled rooms who put her in the VP position. A VP position, I might add that is VERY likely to be a gateway to the POTUS position.
Was it stark, lunatic incompetence or was it something more malign.
Did they pick her because they see her as the perfect tool to crush those who they envy or do not offer adequate homage at the alter of the New Utopia?
Do they think that she is on a leash? So thought the industrialists and generals who put Hitler into power, another craven imposter.
If Harris's personality is "craven imposter" and if she is deeply humiliated on the international stage, I can only imagine what actions she will unleash domestically to vent her rage.

In the end, the motives don't matter. Harris is in the VP slot.

I would love to be wrong about all of this.

Posted by Eaton Rapids Joe at 7:55 AM