I picked up a minor traffic ticket in September. The officer pointed out that I could request that my infraction, which came with "points" could be swapped for a nuisance ticket with no points but a higher fine.

I jumped through the hoops but did not check frequently enough. The request was approved but I failed to pull the trigger quickly enough.

The point that is interesting to the larger audience is that the "nuisance ticket" was for obstructing traffic. I was surprised to see that this infraction does not put any points on the license of the perp and consequently has no impact on their insurance rates. For that matter, if they are on their parent's policy, it has no impact on the rates that the parents pay and, in fact, it is likely that the parents will never know of the infraction.

My reaction is two-fold. Obstructed traffic often leads some less-patient or less experienced drivers to make decisions that have tragic consequences. The other reaction is that it gives protestors a free-pass to expose themselves and others to harm with no push-back. It seems to me that people who obstruct traffic should be liable for the same number of points that exceeding the speed-limit by 11mph should be exposed to and to allow the officer discretion in whether he issues a warning or a ticket.

Then, protestors will have a little bit of skin in the game and they might make safer choices.

I signed up for three more days of job-training next week.

Naturally, I would prefer to be working a paying job but then I would have to report the income to the IRS.

Out of respect for Mrs ERJ's time, I bit-the-bullet and purchased one of the fence energizers at the local farm store. I need a fence that will keep the animals where I put them since my training will be off-site and I will be hitching a ride.

Persimmons are ripening. I tasted a "Journey" for the first time. It had only the tiniest bit of bitterness in the membrane that covers the seeds. Otherwise totally free of the bitterness sometimes found in American Persimmons. Seeds were very large. Fruit was smaller than I expected for a D. kaki x virginiana hybrid but that might be due to the dry year.

Lehman's Delight continues to amaze with regard to yield. I-115 and Juhl are outstanding persimmons as well. Juhl is also known as Yates.

I am chipping away at tightening up closures on the garage and other buildings.

In an earlier post about the cost of raising kids, one reader commented that adding kids does not add to the fixed cost of housing. Well, I am here to tell you that maintenance is not a fixed cost and kids can be hard-to-very hard on a building, depending on the kid.

Maintenance costs are not always visible because they are sporadic and we usually lump them with infrequent, not-recurring Acts-of-God line-items in the budget. But maintenance costs of a dwelling can be very large especially if you are not handy (or suffer from vertigo or infirmity) and have to hire everything done.

One week later, I received a message from DeNial that they were canceling the order because the retailer was MIA. They said I could attempt to contact the retailer but they gave no contact information. Searching the internet revealed that there are multiple entities in various states with a name identical to the name given to me by DeNial.

Hmmm! That stinks. I have a 0.3 Joule charger sort of charging the fence and I expected the new charger last week sometime between Tuesday and Friday. For those who are math impaired, 0.3J is 1/20th of 6.0J.

Another tilt at the windmill

Another search of the internet. Another order placed. $25 to have it delivered October 7-11, and October 10-15 if I opt for free delivery.

It would not break my heart to have two chargers. I may end up making a road-trip to Indiana where the closest distributors who carry Parmak fence chargers can be found. Two weeks is a long time to rely on a fence charger that might be up to the task.

A wise person is guiding me in attempting to trouble-shoot the in-op unit. So far there has been no joy.

The gray-beard hauled me back from hyper-focusing on things that MIGHT be causing the problem and redirected me to splitting the circuit in half and determining which half, then splitting it in half again.

There are no relays in the unit. The problem is upstream of the main capacitor.

In very broad brush-strokes, the circuit board ---is supposed to--- charge a 500V capacitor. When it hits (roughly) 500V, it exceeds the break-down voltage of an inert-gas lamp. Once the lamp activates, it acts as a switch and dumps the capacitor's charge through a 20:1 transformer which fires 10,000V to the fence.

Replacement circuit-boards are $55 retail and "out-of-stock" with no estimates of when they will be available.

I went to two of the local farm stores.

One's website said they had 6J fence chargers in-stock but that prove to be false when I visited the store.

Visiting the other store, the guy at the checkout did a hard-sell on the service plan. Paraphrasing, he said they were selling junk and if I bought the service plan I could swap dead chargers for new rather than having to deal with the company who made the units. I declined to purchase the unit.

Local hospitals are shrinking their manpower by 7% due to horrific and totally unexpected decreases in revenues.

Loss of patients during the height of the Covid panic were partially covered by Federal transfers. Many procedures were pushed off-site. Medical providers quickly recognized the higher ratio of billable procedures-per-hour-on-the-clock (not having to commute to the hospital). Insurance companies quickly noted the procedures were significantly less expensive without the hospitals troweling on another layer of overhead.

The panic ended. The procedures did not come back to where they had traditionally been done. Furthermore, a significant number of the caregivers over the age of 55 who worked for the hospital had bailed out.

What do you do when your admissions tank and you still struggle to meet Federally mandated nurse:patient ratios? You pull out your pad of pink-slips and start laying people off.

I wonder if the people who will be looking for work next week will thank Governor Gretchen Whitmer for starting this sequence of events.

Local inventor, Roger Snare, recently released a wild-cat cartridge that consists of  30-06 Springfield brass trimmed back to 1.750" of length with a 0.401" diameter bullet. The chamber reamer offers 0.350" of free-bore and a standard, 3 degree taper as the bullet engages the 1-in-16 inch rifling.

Mr Snare claims the new invention headspaces on the mouth of the cartridge and any .308 Winchester barrel can be rebored and rifled to the new cartridge.

When asked why the world needed another rifle chambering, Mr Snare admitted the cartridge was designed to fill a niche market. Rumors abound that State DNRs will soon require hunters to document the action type and the chambering of the weapon used to harvest big-game. Mr Snare designed the cartridge to be legal in the maximum number of states, to be "cast-bullet" friendly and to cause State game-law enforcement personnel to "stroke out" after thousands of hunters claimed that they had harvested game with "a Snare".

What a difference a quarter-mile makes!

Our neighbors asked me to look after their dog, a Dogo Argentino-Mastif mix*. That means chaining its collar with a double length of logging chain and affixing the other two ends to a concrete pier before opening the door for it to go outside and do its business.

The dog is surprisingly calm after it drains the water-bed and I enjoyed sitting on my neighbors' front stoop and watching the sun rise. I also saw a boatload of deer. The visibility was surprisingly good considering the early-morning haze.

Of particular interest were the deer percolating through the fence and leaving my property. One of them was a doe. She stopped and two fawns came up to her and nursed. While I have many deer use my property, the heavy cover prevents me from seeing them from the house.

*I may have taken liberties with the dog's ancestry for privacy reasons. 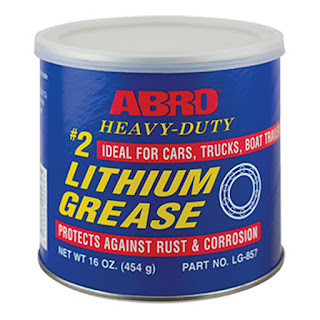 The FDA recently announced that it approved the use of Lithium Grease for the treatment of anxiety and depression in Americans, just in time for the mid-term elections.

As most people know, Lithium Carbonate was the first drug approved for treatment of depression but it is a difficult drug to administer.

Lithium Grease is much less fussy in dosage and avoids problems with how it is introduced into the body.

It will be administered as a suppository.

I got the anode rod in the water-heater changed out. I told Mrs ERJ it was a three-hour job. It took 20 minutes. Well, it COULD have taken three hours if things had gone poorly. Mrs ERJ suggested I order another anode rod for next year and have it and the tools staged. Smart girl!

I got the lights in the basement either working or changed out. It is much brighter down there.

Mrs ERJ commented that the refrigerator was "warm". I used our IR thermometer and it agreed with her. She may have just caught it in a defrost cycle. This bears watching. I bought some time by buying four, seven-pound bags of ice and stashing two in the fridge and two more in the freezer. I put them in aluminum foil, lasagna pans to catch the drippings. Technically, we have what used to be called "an ice-box".

Mrs ERJ was so pleased with the advice rendered by you, the readers, with regard to the washing machine that she "suggested" I solicit your advice regarding refrigerators. Mrs ERJ favors freezer-on-the-bottom models.

Mrs ERJ had a personal victory that I am not at liberty to disclose but we are both exceptionally happy about it.

Possibility of frost tonight. I brought in the last of the squash and three watermelons.

Oh, and I was able to hobble around today in spite of 6.5 hours on my feet yesterday.