I had several people respond and two crews show up to pick sweet cherries.

The first crew was from Village Summit.  Marcus Brown is the lead guy from Village Summit and he is very dedicated to fixing the food desert found in older, city neighborhoods.  My eyeball measurement is that they picked about seven gallons of sweet cherries to take back with them.

Unfortunately, I did not get any pictures of the Village Summit crew.  I try to do better when they come back to pick peaches.

The second crew was from Growing Community (Community Garden).  They showed up at about 6:00 PM.


The funniest moment of festival was when somebody was watching me trying to knock cherries from the branches with a pole.  They said, "You know, Joe, you could harvest a lot more cherries if your pole was bigger and stiffer."  And no, they had no overt appreciation of what they had just said.  We will not bring Freud into this discussion.
Posted by Eaton Rapids Joe at 9:00 PM No comments:

This is a classic piece of political oratory.  It should be studied by every voter.  Modern politicians tend to be a little more subtle. 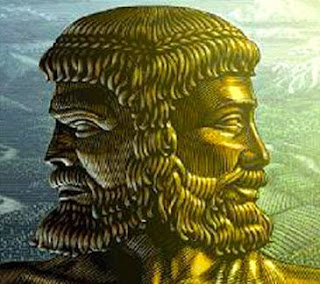 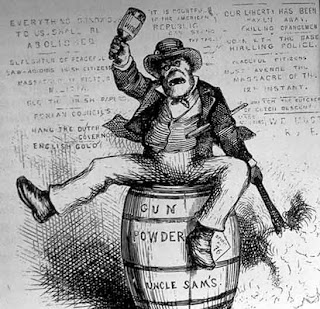 If when you say whiskey you mean the devil's brew, the poison scourge, the bloody monster, that defiles innocence, dethrones reason, destroys the home, creates misery and poverty, yea, literally takes the bread from the mouths of little children; if you mean the evil drink that topples the Christian man and woman from the pinnacle of righteous, gracious living into the bottomless pit of degradation, and despair, and shame and helplessness, and hopelessness, then certainly I am against it. 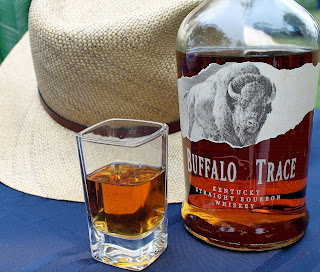 But, if when you say whiskey you mean the oil of conversation, the philosophic wine, the ale that is consumed when good fellows get together, that puts a song in their hearts and laughter on their lips, and the warm glow of contentment in their eyes; if you mean Christmas cheer; if you mean the stimulating drink that puts the spring in the old gentleman's step on a frosty, crispy morning; if you mean the drink which enables a man to magnify his joy, and his happiness, and to forget, if only for a little while, life's great tragedies, and heartaches, and sorrows; if you mean that drink, the sale of which pours into our treasuries untold millions of dollars, which are used to provide tender care for our little crippled children, our blind, our deaf, our dumb, our pitiful aged and infirm; to build highways and hospitals and schools, then certainly I am for it.


The label if-by-whiskey refers to a 1952 speech by Noah S. "Soggy" Sweat, Jr., a young lawmaker from the U.S. state of Mississippi, on the subject of whether Mississippi should continue to prohibit (which it did until 1966) or finally legalize alcoholic beverages

All pictures borrowed from the internet.
Posted by Eaton Rapids Joe at 7:16 PM 1 comment:

I got on the scale this morning.

I gained 3.5 pounds in the last three weeks.  This is not good.

OK, it was a bat, not a bug.  Apparently, they do not like cold jets of liquid blown up their knickers.

I have calls out to some of my friends.  While mowing I noticed that about 1/3 of the sweet cherry crop was on the ground.  The racoons and possum found the tree.  There are still about 7 gallons of cherries on the tree.  We will see if any of my friends can bend their schedule on short notice.  I suspect the racoons and possum will finish the tree off tonight.
Posted by Eaton Rapids Joe at 11:46 AM 2 comments:

I went for  a long run today and it kicked my butt.

The temp was about 65 F.  The dewpoint was about the same.  My glasses fogged up repeatedly.

Total run was 8.5 miles + an additional half mile cool down.

My electrolyte was Peach-Mango-Lemonaid.  Yum!

My run took me across three streams.  This is the prettiest sounding one.

One advantage of running an out-and-back is you can stash your electrolyte bottles and lighten your load quickly on the way out.  If you have not guessed, I treat long runs as a series of 3 mile runs.

Posted by Eaton Rapids Joe at 7:20 PM No comments:

---Disclaimer---
I would barely make a callous on the tip of a really good gardener's pinkie finger.  I am pretty good at taking pictures and typing.  I am really not as good as this blog makes me look.
---End Disclaimer---

Most years the adjustments involve watering.  This year the rains have been very good to us.

I was walking by the barn orchard (note to gentle reader, we have many plantings or orchards on the estate) and the peaches did not look happy.  They showed the symptoms of Nitrogen deficiency.  Pale green color: Check.  Wimpy shoot extension: Check.  Heavy sod around base: Check.  The boss forgot to fertilize the peach trees in this orchard:  Check.

In a typical year, a good succession plan would involve plantings that overlapping like shingles on a roof.  The mature vegetables would be harvested and...behold, the next generation would be in place with a substantial canopy.  They would be productively photosynthesizing most of the sun falling on the garden row and have a massive head start on the weeds.

This season has not been typical.  I am getting back into the game and the season feels like it is half over.

Most casual gardeners are one-and-done...a bit like half the teams that go to the NCAA Basketball tournament.  The dynasty programs have a plan of succession.  Not just game-to-game, but also season-to-season.  Strive to be a dynasty program.

Posted by Eaton Rapids Joe at 3:24 PM No comments:

I took my two daughters to Total Firearms in Holt, Michigan.

I called ahead.  They advised that I bring ammo.  They also advised that they really wanted them to shoot 100 rounds through a 22 LR before graduating to bigger stuff.

Mr Rick Burroughs very patiently walked them through the plan.  Rick has been training new shooters for 40 years.  He has the patter down and knows what questions they will ask before the trainee does.  He was unfailingly calm, patient, explained things clearly and emphasied safety.  I highly recommend Mr Rick Burroughs as a trainer for new shooters.  He took everything in stride with nary a hiccup.  Not everybody can graciously accommodate left-handed, right-eye-dominant shooters with overly protective dads.

You don't suppose these girls are competitive.  Do you?

Then back home to the mother-ship for cinnamon rolls with cream cheese icing.


We will be back.
Posted by Eaton Rapids Joe at 9:04 PM No comments:

Imagine a town of 30,000 people springing up in your zipcode overnight.  Imagine that town has no infrastructure, no tax revenue.  Also imagine that many of those 30,000 have a very "flexible" understanding of the concept of private property and less understanding of personal "camping" hygiene than your average Haitian.

You have a Rainbow Gathering.

The natives are not impressed.

My understanding is that the locals intend to support the increased demand for public services via bake sales.  Previous efforts in other locations were hampered by theft of baked goods.  Rumor has it that the most popular recipe for these bake sales involves blueberry muffins that have their shelf life and mouth feel enhanced via an undisclosed amount of lactose.

Locals are also investigating a technique for improving the longevity of small engines by purging the alcohol from gasoline.  The actual method involves partially filling a 5 gallon gasoline container with gasoline and then adding water to bring it up to the 5 gallon mark.  Diffusion of the ethanol into the water is accelerated when the five gallon container is left in the sun.  Most recent calculations by the Montana School of Mining and Petroleum are that the gasoline should be ready for separation by July 21.

My expectation is that you should be able to get a good price on VW Micro buses by mid-July in Southwest Montana.

Tell them "Joe" sent you.

Posted by Eaton Rapids Joe at 10:14 AM No comments:

My youngest son has been in need of a work bench.

He is a doing kind of kid and did not have a space of his own.  He would do most of his serious wrenching in the driveway, on the concrete apron in front of the garage.  There were potential downsides regarding small pointy objects and vehicle tires.  Plus, several of his projects were, ah, negatively impacted when vehicles backed out of the garage before a thorough inspection of the flight path had been surveyed.

Youngest son had many objections to the new plan.  His biggest beef is that the benches (tables) were dimensioned for stand-up work.  He thought he ought to be able to sit while wrenching.

The tables are 40.5 inches tall, 32 inches deep and 48 inches long.  For background info, I anticipate my youngest son will stop growing at about 6' 2". 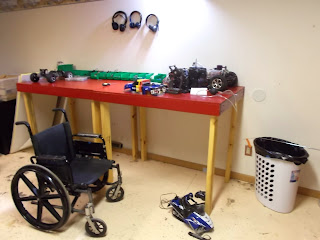 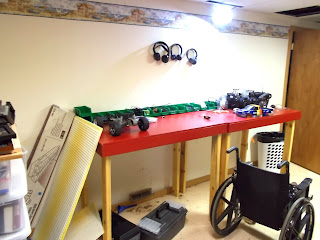 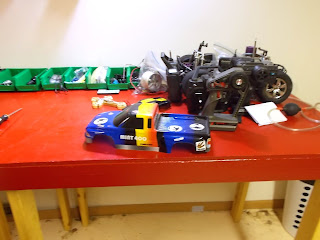 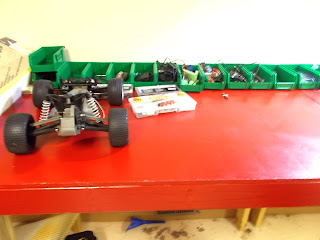 It looks to me like he overcame his dislike and started nesting.

Posted by Eaton Rapids Joe at 9:37 AM No comments:

My everyday carry on long runs

This is what I carry when I intend to run more than 3 miles.  The load varies.  Sometimes there is insect repellent and sun screen.  You will notice many of foot care products and many "Boy Scout" Be Prepared items.

Electrolyte is typically a half liter (about 17 ounces) bottle for a 6 mile run, two bottles for a 9 mile run.  I pre-position bottles on three mile intervals if I am planning on running more than 10 miles.  Temperatures above 88 degrees F jack up the amount of liquid I need to carry.

I mix my own electrolyte because I am cheap and I want to drinking plenty of it.

In a clean, one gallon plastic container (known as milk jugs in our household), I mix 8 ounces by measured volume of table sugar, 1 measured teaspoon of non-iodized table salt, and two packages of Kool-aid....one of which is always Lemonaid.  Fill with clean tap water and shake until sugar is dissolved.

I figure it costs about fifty cents to make a gallon and there are more than seven half-liters to the gallon.  A single bottle of commercial electrolyte costs over a buck.

-Joe
Posted by Eaton Rapids Joe at 7:59 PM No comments:

I am starting to get a little bit of feedback on what I have written.  So far the most common observation has been, "Wow, how can you run 6 miles?"

The answer is that I find each run fascinating.

I was raised to believe that saying "I'm bored!" tells the listener far more about the limitations of the bored person than it does about the environment.

I carried my camera in my pocket and took pictures of some of the highlights from today's run.


I find this run and all my other routes enchanting.  It is a story that unfolds a little at a time.

I was raised to believe that saying "I'm bored!" tells the listener far more about the limitations of the bored person than it does about the environment.  My parents raised me well.