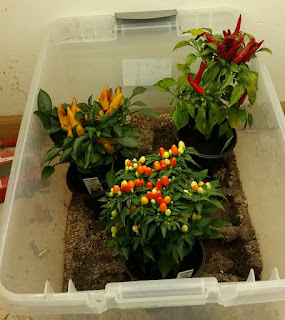 I was in-line at Horrocks yesterday. I was buying end-of-season ornamental pepper plants and chives.

Horrocks is a combination gardening store, high-end grocery store, beer/wine store and florist. It is Lansing's interpretation of yuppie chic.

I was making the usual chit-chat to make the wait go faster.

When it was my turn I asked the lady behind the register "How is your day going?"

She replied. "Pretty good. Better than the weekend anyhow."

My curiosity piqued I asked "What happened on the weekend?"

"I had several customers get very angry over prices" she said "Bat-shit crazy mad."

There is a certain genius in the Parliamentary system that we rarely recognize in the United States.

The Parliamentarian system allows the electorate to exercise buyers' remorse.

Biden and the fools who currently head the Executive Branch probably would be broomed about now if we operated under the Parliamentary system. The GOP hates him. The uber-progressives despise him. Moderate Democrats (the Ivory Billed Woodpeckers of D.C.) know his entire administration is a rudderless, hot-mess of buzz-words.

Conventional wisdom in politics is to take your pain early so voters can forget.

The fact that Biden's administration floated the idea of giving every family separated at the border $450,000 per person (Two million per family?) while yuppie-puke, core Democrat constituents are having melt-downs at the grocery store is emblematic of how spastic and confused this administration is.

Posted by Eaton Rapids Joe at 7:01 AM