What every young man needs to know about women, Part II 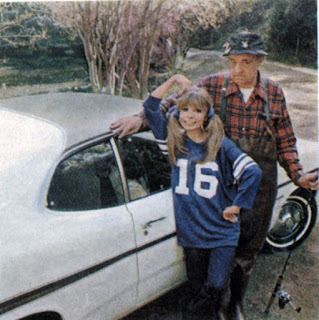 Owen had been walking on Cloud Nine lately. He had a 'whip' and a girl.

"Me and Mary Jean had a fight" Owen said, morosely.

Ahhh! Mary Jean Kyleigh. Owen and Mary Jean had been dating and as much as Fred loved his grandson, he though Mary Jean was just a bit out of Owen's league.

Not that Mary Jean was uppity or anything. Far from it.

Fred had been watching the swarm of kids Owen's age since Owen was in Kindergarten. Mary Jean stood out even then.

Mary Jean didn't have a particular posse. Rather, she floated like a butterfly between them.

She would shoot baskets with the boys even during those awkward 6th-through-8th grade years.

For a while, Mary Jean hung out with some girls with major issues but she seemed to sail along without being damaged by the association. Some kids trip over a shadow and break both wrists. Mary Jean seemed to be able to sail through a volcanic eruption and leave with a bikini wax.

Her complexion looked like pure Ivory Soap. Her figure was not lushly feminine but tightly braided whip-cord. Fred had no doubts that the curves would arrive in due time.

Fred's wife was in favor of the two going together because Mary Jean had a cross hanging from the rearview mirror of the ancient Plymouth Duster she drove.

It was a mystery to Fred why Mary Jean picked Owen but he knew better than to stand in the way of young love. Better men than he had been trampled before.

"What did you and Mary Jean fight about?" Fred asked.

"She got mad when she caught me looking at another girl" Owen said.

" '...looking...'what does that mean?" Fred asked. You couldn't go to high school without "looking" at two hundred girls a day.

"Did you know that Mary Jean's cousin goes to Hoover Academy on the other side of town?" Owen said.

"Boy cousin or girl cousin?" Fred asked. He already had a pretty good idea of the answer.

"Hoover Academy? So she is high school?" Fred asked.

"She is a cheer-leader there" Owen said. "And I am telling you, she is a 'biscuit'."

Fred was not sure what a 'biscuit' was but based on Owen's expression, it probably meant that Mary Jean's cousin was very attractive.

"So you looked at Mary Jean's cousin?" Fred asked.

"Its not like we are married" Owen said, defensively.

"All I did was ask for her number and put it in my phone" Owen said, justifying his innocence.

"Remember when I told you men and women were different, and it wasn't just the plumbing?" Fred asked.

"That is one of the differences" Fred said.

"You play a game of pick-up basketball at the park you don't much care who is on your team as long as you have a decent chance of winning. Probably, from day-to-day the team changes a lot."

"Women are not wired that way" Fred said.

"I can only tell you about women worth keeping" Fred said. "I don't know much about these 'modern' girls. Maybe guys are 'accessories' like a purse with rhinestones on it for them. They pull out a fancy purse or a fancy guy when they want to go out on the town and don't really care which one it is. They are too busy living their-best-life."

"Things haven't changed that much since caveman days" Fred said.

"Someday, your woman will be be as big-as-a-house pregnant and maybe have two...three young-uns to boot. She needs a man who is a damned-big-hero. One who will stand between the sabre-toothed tiger and her and the young-uns and not be off sweet-talking some pretty young thing."

"You are trying to keep on foot on the dock and the other in the canoe. That just isn't going to work. You are going to go swimming and end up with neither."

"Mary Jean is safe. She is the dock. Mary Jean's cousin is the canoe. Likely, she is using you to make Mary Jean feel unattractive. It is a game some cousins play."

"If you want the cousin, break-up with Mary Jean and delete her phone number from your phone. You owe it to both girls."

"If you really like Mary Jean, delete the cousin's number and if you meet again, be polite but not friendly."

"You have a chance here to be a damned-big-hero or be a player. Which ever path you start down, realize that it gets harder and harder to change direction as you go along. If you pick the hero's path you end up with a girl worth having. Choose the path of a player and you get....I don't know what you get."