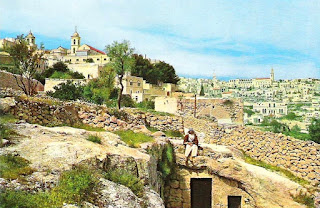 As a general rule, I try to follow the commandment to "Not bear false witness"

That means to avoid gossip, to not present as "true" what I have not verified as true and to not tell lies.

That presents a dilemma when I stumble across something of interest that I have little means of verifying.

The etymology (origin) of the name "Bethlehem" is the blending of the noun "Beth" or "House" and the verb לחם (laham). Laham is an interesting word because it can be interpreted as the verb "to make war" or "to eat".

Christians like to say that laham translates to "bread" which dovetails very nicely with Christ's "I am the bread of life..." but that may be a bit of a stretch. "to eat" is a verb and "bread" is a noun.

I am not a linguist. This is beyond my ability to sort out.

It is human nature to bend things to fit the way we wish the universe was put together.

It would be oh-so-convenient if Christ came to justify harmony at any cost. That could be a misreading of the Gospel. At one point Jesus is quoted as saying "I have come to set the world on fire and I wish it was already burning."

We should consider and pray about the possibility that Jesus was born in a town known as "The House of War" rather than "The House of Compromise, Concessions and Chamberlain's 'Peace in our Time'."

While we are told to not judge, we are also told to exercise discernment.