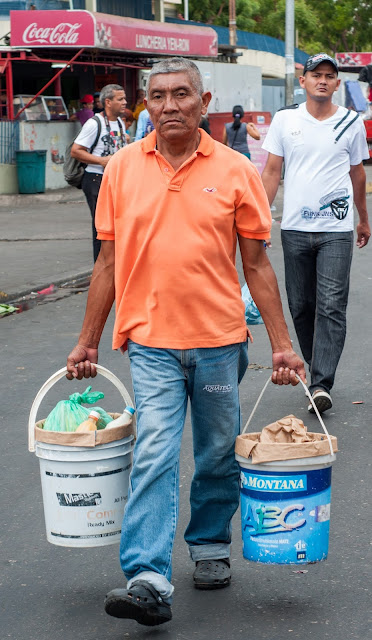 With the economy in a flux, people will likely find themselves doing different kinds of work than they are currently doing.
They might find themselves gardening, or digging holes or cutting and moving firewood.
Kubota's new job
The reason work-hardening is on my mind is because of Kubota's new job.
I am not at liberty to go into details but it involves carrying sixty-pound buckets of something up-or-down stairs.
He worked Monday and Tuesday, had yesterday off and is working today and Friday.
Ideally
Ideally, Kubota would have started carrying weighted buckets as soon as he realized he had a good chance of landing this job.
We have stairs.
Even a half-hour a day of carrying the buckets up/down the steps for the first week and then two half-hour sessions on the second week would have hardened him up significantly.
What happened
He watched TV and now he is paying the price.
He was lucky he did not have to work Wednesday. The third morning is the hardest. He had one recovery day.
A real world example
I worked in a factory where the Health-and-Safety rep determined that adult humans were not capable of lifting more than 12kg.
She made that assessment based on the injury history at the plant. You see, Health and Safety people believe that every injury is preventable.
While that is arguably true in theory, in practice there are some people who want to go on disability. There are compliant doctors.
Over time, the "maximum weight" that could be lifted dropped and dropped and dropped.
One of the parts in the plant (which will remain nameless for reasons that will become obvious) weight about 32 pounds, or about 15kg.
Since the part was more than the 12kg limit, the plant required engineering to install a lift-assist. A lift-assist is essentially a hook suspended from an electric hoist on the end of a swing-arm.
The problem was that the electric hoist was very slow AND since there was only one of them, only one part could be processed at a time. In practice, the only way to "make rate" was to move the parts by hand so the tool could be working on the next piece while the previous one was carried to the line.
It was an open secret in the shop that the station had never made rate and never would make rate. If the Health-and-Safety department had learned of the station, they would have been forced to red-tag the station and shut down the plant. It did not matter that the Corporate weight limit was closer to 35 pounds than to 25 pounds.
People would have been fired.
So how did the operators lift the unliftable weight?
Through a well-thought-out work-hardening plan.
They rotated through the jobs every two hours so nobody had to lift the 32 pounds, 60 times an hour for 8 hours.
When a new person came into the team, they magically found an extra person to build two of the parts for each part the new person built.
Where did that extra person come from? It came from management who always shuffled an extra absentee replacement to that team when breaking in a new person. After all, several management heads that would roll if/when the non-use of the lift-assist was discovered.
The first couple of days the new person built every third part, that is, 1/3 of the parts. Then the next couple of days the new person would build 1/2 the parts. On Friday the new person would build 2/3 of the parts.
The other employees like the help because the absentee replacement stayed at the job and gave breaks to the regular employees so they could do walk-abouts.
The second week the new employee was expected to do 100% of the parts although the team-leader kept an eye on him-her, especially if they were over 40 or were petite.
Back to the new economy
Since the "new economy" might be some form of self-employment it is up to each of us, individually, to make work-hardening plans.
This is a very big deal if the work involves power-tools like chainsaws.
Just a few tips:
Posted by Eaton Rapids Joe at 7:35 AM