Quest: The Devil is in the Details (bonus installment) 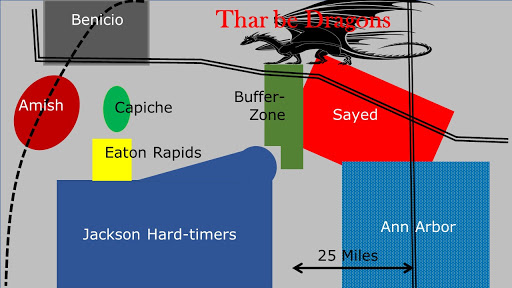 Chernovsky unfolded an old, state highway map. He laid a piece of plastic film over the map and then marked out what he believed were the footprints of the major players in the area.
Pep asked what the dotted line was.
Chernovsky informed him that it was the railroad that was within days of coming into operation.
Pep was also interested in the knob that stuck out of the northeast corner of the Jackson Hard-Timers territory.
Chernovsky was unaware of how slowly information diffused. He had the privilege of sitting in meetings with the movers-and-shakers. What was common knowledge at that level was a mystery to lower levels.
"That knob is the reason why the Hard-timers exist. That is an oil tank-farm" Chernovsky told him. "According to Wilder, when it is full it holds 2 million barrels of crude and half-a-million barrels of refined diesel and gasoline."
Pep whistled. That was untold wealth. No wonder things were so tense down there.
"What is the mission? What do you want us to do?" Pep asked.
"That is just it" Chernovsky said, a rare note of doubt tempering his voice.
"We need to disrupt Ann Arbor's attack. So far, we have been happy to wait for them to come to us and break their teeth on our defense" Chernovsky said.
"That was before we knew they had poison gas. The chemists tell me that once you have a process set up for synthesizing poison gas, it is a simple matter to keep cranking it out." Chernovsky shared.
Then Chernovsky reverted to analogies related to the football field.
"We need a pass-rush. So far, their quarterback has had all the time in the world to set up his plays and wait for receivers to break into the open. We need to give him something else to worry about. Something urgent and painful"
Blitzing the quarterback was something Chernovsky had intimate knowledge of.
Pep had stopped playing football after 9th grade but he watched it on TV and had played it at lunch through high-school. He knew what Chernovsky was talking about.
"So tell me about the possible targets" Pep said.
Chernovsky sighed. "There is only one approach from the Buffer-Zone that does not involve drilling through miles of highly urbanized areas. That is from the north."
"We looked at several targets but the chances of your team being able to make a significant strike and then be able to escape were almost zero. There was only one viable target on the north side of Ann Arbor."
"The thing about the north side of Ann Arbor is that the Huron river floodplains prevented it from being built up. A team can infiltrate, do some damage and then possibly exfiltrate."
This is when Pep fixed Chernovsky with a piercing look. "So you are telling me this could be a suicide mission?"
"That depends on how good of a planner you are and how well the team executes" Chernovsky throwing it back on Pep's shoulders.
The role of Lady Luck was left unsaid.
"Show me what you have" Pep said. 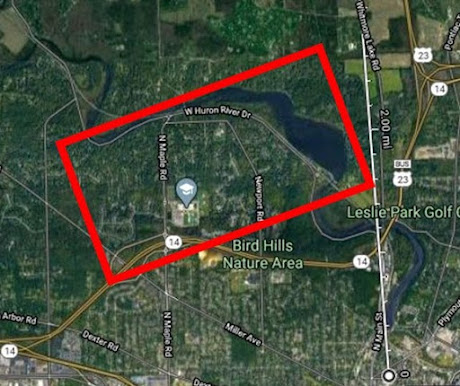 Target is at bottom of the "ruler" near lower-left corner of the map
Chernovsky pulled out an image that had been printed in color. It was a testament to how critical Chernovsky considered the mission that he had used up some of Capiche's limited supply of ink for Pep's briefing.
"What is the red box?" Pep asked. He had his suspicions but he wanted to hear Chernovsky say it.
"The red box is mortar range" Chernovsky said. The maximum mortar range is just barely across the river."
Pep knew that half of the rounds would likely not be able to hit maximum range and that his ability to adjust for elevation would be very limited.
"So you are telling me that I either need to be on the south side of the river or set up a firing position in a swamp if I am going to use mortars." Pep said. In mid-May swamps were more like shallow lakes.
Chernovsky simply nodded. That is how he saw it, too.
"What does Little Howie range look like?" Pep asked. 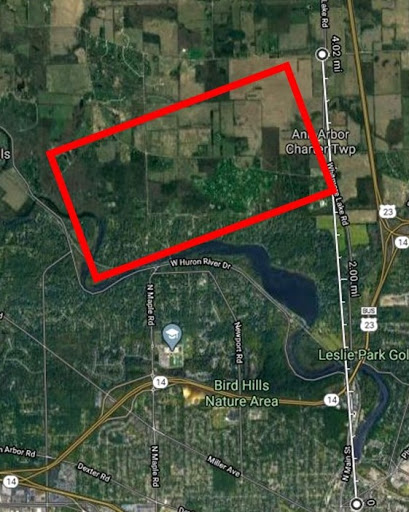 "Well, that looks a lot better" Pep said with the first bit of enthusiasm he had shown. Pep understood that Little Howie had a max range of six miles but Little Howie had the same issues as the mortar, in fact any artillery if you planned to use it at maximum range. The Little Howie at four miles would still be significantly more accurate than the mortars at two.
The fact that they would have the Huron river between them and Ann Arbor was a distinct advantage in Pep's book.
"So, what is the overall goal of this mission?" Pep asked. "What are we trying to achieve?"
"In a perfect world, it would be a false-flag event that materially impacts Ann Arbor's ability to make war against us, but one that they will blame on Jackson" Chernovksky said. "But I am a realist. If you can pull off a false-flag or materially damage Ann Arbor on their home turf, then you will take pressure off the Buffer Zone."
"Let me play with this a little bit" Pep said. "I can see one problem already. Humping in a mortar or a Little Howie means I won't have much ammo to play with, so accuracy is going to be a very big issue."
At roughly fifteen pounds a round for both the mortar and howitzer rounds each fighter could hump in three rounds. The mortar would require a minimum of three fighters porters and Little Howie would require four. That didn't leave very many for ammo.
Pep's dismay regarding accuracy issues increased when Chernovsky told him just how small the target was.
Posted by Eaton Rapids Joe at 12:30 AM