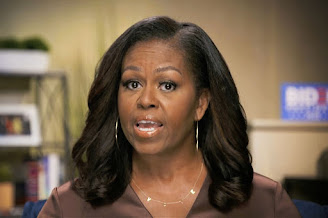 One of the things you learn in supervision is to keep asking "Why?" until you reach the bedrock of the problem. As a rule of thumb, asking "Why?" five times might get you close to the bedrock.

When somebody brings a problem to you it is human nature that they skewed the story to make themselves less culpable and more awesome.

Let me give you an example.

Suppose a former First Lady claims that American is marinaded in racism and uses the "fact" that she snuck out with her two children and went to a Dairy Queen "incognito". She claims that the person serving the soft-serve cones would not look her in the eye.

If you accept this story at face value then approximately 30 Secret Service agents and supervisors need to be fired.

She sneaked out? She was walking down the Washington Mall and nobody recognized her?

Justice demands that Trump find out what day(s) this happened and the Secret Service agents responsible for her safety, and the safety of the President's children be fired and that they be blackballed from future employment in law enforcement or security. They should not be able to get a job guarding Porta-Potties.

And the management needs the same treatment at least two levels up.

Imagine the leverage a foreign power would have it it kidnapped the President's children?

That is the problem with "telling stories". The story-teller is rarely prepared for the consequences when their story is peeled apart and others look-under-the-hood. "Oh, my little, white lie is going to get 30 people fired? Bummer."

Let's look at a couple of other hypothesis. These people love to put signs in their yards saying they believe in BLM, Science, yada, yada, yada.

Suppose the teenager working the soft-serve machine is terrified of 21, buff, armed, body-guards who were actually present doing their job.

Or, suppose the employee was on the receiving end of 24 hours of "Cultural Sensitivity Training" and was indoctrinated with the belief that looking an African-American in the eyes is an act of aggression.

In either case, the former First Lady needs to check her "White Privilege". Ironic, isn't it?