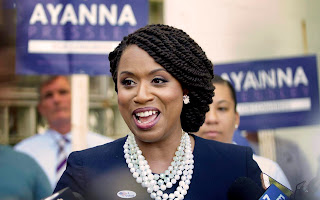 Ayanna Pressley is the new dark-horse favorite for Biden's VP pick to be announced August 10.

Inside sources confirm that the Democratic god-makers are terrified of the video footage of Bernie-Bros and Marxists burning down cities if Biden chooses a moderate VP. They can squash the footage on mainstream media but cannot stomp out every leak on the internet.

Faced with no good choices, the Democratic god-makers are going all-in on Pressley, who will likely be President before November 2021.

Concerns about the reaction of moderate Democrats and independents were dismissed. "It is easier to double and triple-count votes than it is to rebuild cities." alluding to the fact that luke-warm candidates result in low voter turnout.