Violence as an abstract concept

This quote has been attributed to many. I first saw it on The Art of Manliness website. 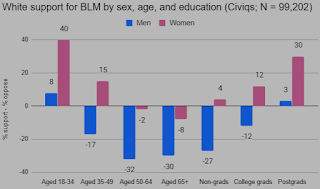 The author notices that support level drops as white men and women get older and that it is highest in white women with advanced degrees.

The author makes an observation that is worth thinking about and discussing.

Highly educated, white women support The Revolution because violence is still an abstract concept for them.

The case for the observation
Universities are as cloistered as a convent. Micro-aggressions, forgotten or mispronounced synthetic pronouns are equated with rape and assault, safe-spaces, men being eliminated from academic programs because they "look scary" or utter unsanctioned thoughts.

This stereotypical grad student in one of the social-sciences considers getting a B on an essay, one she worked really, really, really hard on, to be violence.

She considers snarky comments on one of her social-media posts to be violence.

Supporting The Revolution is a low-risk way of scoring points on social media and a badge of being a member of "the in group".

In this parallel universe of rewarding-approximate-behaviors, correctly identifying the zip-code of the target is considered the same thing as delivering ordinance on top of it. 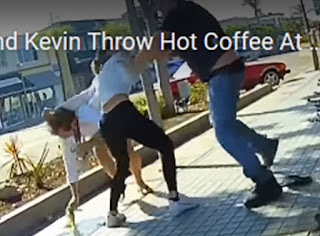 It is possible to grow tropical orchids in New Brunswick, Canada as long as you have a greenhouse and enough fuel to keep it above 80 degrees Fahrenheit year-round.

If there is a single hiccup in your fuel deliveries, your business plan to deliver orchids to the market collapses into puddles of incoherent, green mush.

What will happen when those highly edumacated girls get kicked in their $12,000 orthodontically perfected teeth?

That is when "violence" changes from an abstract concept into an ugly reality. It only takes one angry person with size 9 boots to turn "Give Peace a Chance" into incoherent puddles of green mush.

But within the universe of White people, it is compelling.
Posted by Eaton Rapids Joe at 8:08 AM