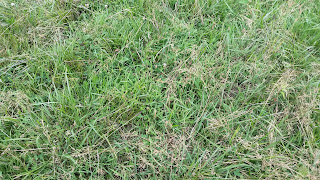 It is trite but true, if you don't change anything then your results are unlikely to change.

Redtop (Agrostis gigantea), the grass species, is not very palatable and not very productive. It is, however, capable of growing in wet soils and soils that are not very fertile and soils with low pH.

Some parts of my pasture are dominated by redtop. They are poorly drained and the soil is heavy in clay.

One fundamental question that needs to be addressed before committing money to planting a more palatable, more productive species of grass is to determine the dominant reasons redtop took over in the first place.

I have some regions of my pasture where bluegrass and orchard grass and tall fescue and white clover and birdsfoot trefoil dominate. That rules out grazing management as the major issue.

Two other possibilities for the areas where redtop dominates relate to nutrients and shallow hardpan.

It is easier to test for nutrients and if there is a hardpan, deeper rooted, more productive species might solve that issue as a matter-of-course.

Consider what we know about redtop grass. It outcompetes other grasses in soils that are poorly drained, low pH and infertile.

Low pH and infertile are joined at the hip. Soil that is marginal for phosphorous is fine if the pH is near 7 but the phosphorous is  not available for plants to absorb when the pH is significantly lower.

Under those conditions of limited phosphorous AND lower pH, phosphorous availability will limit the species composition...and the forage mass...of forage produced.


So picture an experiment where one quadrant is the control and no amendments are made to the soil. Each quadrant is approximately 35'-by-35'.

Picture another quadrant of approximately 1000 square feet where 50 pounds of ground limestone is added for a net rate of about 2000 lbs per acre.

Picture the last quadrant receiving both the 2000 lbs of lime per acre and the 250 lb of P and K per acre.

While these rates of application might seem extravagant, it is good to fire-for-effect to avoid ambiguous results. It stinks to run make an effort to run an experiment and maybe think you see a difference.

But why the phosphorous?
Traditional wisdom in this part of the world is that we have plenty of phosphorous and tend to run short of potassium.

That is what I believed until I had a salt lick for the deer. I added calcium phosphate to the lick because phosphorous is one of the limiting factors for antler growth.

Two years later I had a huge bloom of birdsfoot trefoil in the clay soil around the lick. While it is possible that the deer visiting the lick all urinated profusely and deposited potassium, the more likely explanation is that MY clay is short of phosphorous and the materials in the lick got tracked around and provided enough P on the surface to give the trefoil seedlings a good start on life.

I did not plant trefoil seeds near the salt lick. Birdsfoot trefoil existed in my pasture at a very low level. Cows and sheep had been eating and spreading it. The seed pods fling the seeds when they dry and snap open. The seeds had been there and germinating every year but they fizzled for lack of phosphorous.

The parts of my pasture dominated by redtop assuredly have plenty of white clover seeds germinating every year. And perennial ryegrass and bluegrass and fescue seeds and so on.

White clover is the canary-in-the-coalmine for nutrient availability. If there is enough P and K to make white clover happy, then there is plenty for any of the better grass selections. If any of the plots show a +30% canopy of white clover or birdsfoot trefoil after a nutrient treatment then I found a winner.

It will be interesting to look at the test plot this time next year. The answer I want is to have the plot that received just lime (very inexpensive) be as rich in white clover as the other two plots.

The most ambiguous answer would be if the plot that received just the 6-24-24 performed best. That would be an anomaly and I would have to investigate whether phosphorous or potassium gave me the biggest bang-for-the-buck.