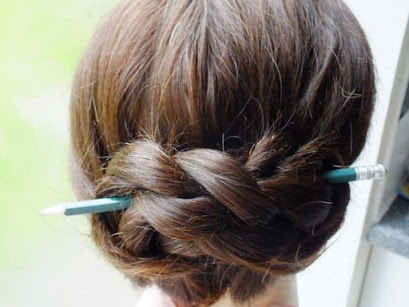 Bicklebaugh was released from the hospital after an extended period of observation.

He still had no ability to vocalize and very little motor skills of any kind. Typing was out of the question.

He could blink his eyes in response to questions, indicating that he was fully functional behind those eyes should anybody be patient enough to play twenty-questions with him.

Below the groin he was non-responsive to pain.

In deference to Bicklebaugh’s service to the cause, the People's Collective Voice retained a personal care-taker, a woman who came VERY highly recommended, Siri A. Lemmock.

After the obligatory joking around about Siri’s first name and the digital assistant associated with a brand of smartphones, the movers-and-shakers of Ann Arbor delegated Bicklebaugh's care to Lemmock and then rapidly forgot about Professor Bicklebaugh.

Lemmock’s specialty was to insert tiny slivers of carbon-fibers beneath nails, the undersides of eye-lids, alongside molars and in urethras and ear-drums. She liked to insert the slivers she made by hammering fishing rods into splinters into the erasers of common, #2 pencils and then wearing the pencils as hairpins. The slivers were so fantastically slender nobody EVER noticed them.

Lemmock found many places where Bicklebaugh felt pain, places he did not even know existed.

Sadly, it became necessary to strap Bicklebaugh into his wheelchair. He often fell out of it in the excitement of seeing his caretaker when she entered the room.

Belatedly, Bicklebaugh realized that he had never been the Maestro-of-Evil he had imagined himself to be. Rather, evil had chosen him and worn him like a glove...disposing of him when he was worn out and no longer useful.

Staring into the malevolent eyes of his care-taker, Bicklebaugh realized he had never been more than a vehicle of convenience. He had never "controlled" evil, rather it had controlled him, allowing him to entertain the conceit that he was the master. It was a bitter realization.

Mészáros regularly deviated from the flight-plans he had been given.

He gloried in the power and speed of his plane.

Spotting groups of the Neanderthal-like Hard-timers, Peter would fly past them at elevation and then drop down to the deck and them buzz them. He imagined that he made more than one of them soil his shorts.

When questioned about his inordinate use of fuel, he merely responded “Put it on my tab.”

Since he brought back more, and better images than most of the pilots, the intelligence community overlooked the anomalies.

Peter was an intelligent man, even if he was not particularly wise. He quickly deduced that the streets he buzzed one day were frequently more crowded the next day.

It gave him a rush to buzz the street again but from a different direction.

The clearing of houses continued at a break-neck pace for Thibodeaux’s team. They started taking on members from other squads so they could pick up “pointers” on how to speed up their operation.

Even with the higher density of houses on the road along the river AND the Political Officer assigning them the north-south roads from the river to the next road, Thibodeaux’s squads left the teams clearing the other roads in the dust.

That posed a problem in that left Thibodeaux’s flanks was more exposed to attacks from angry natives. Thibodeaux had a couple of plans on how to slow his teams down.

One plan involved knocking off for the day early in the afternoon before the heat and humidity peaked.

The other plan was to have a quarter of the combined squads take a break and go swimming in one of the deep, gravel-bottom bends in the Red Cedar river. Half of the swimmers maintained armed over-watch while the other half swam. Then they switched.

One of the women in Thibodeaux’s half-squad was a girl named Alexandra. She had short, spiked hair, violet eyes and blue, green and purple dragonflies tattooed everywhere on her body. Yes, everywhere.

They wore no swimsuits except the ones God issued.

Alexandra kept razzing Thibodeaux. She was a bit of an exhibitionist anyway and she liked flashing the tops of her bosoms at any man who would look. And now she had much more than a bit of décolletage to show.

It occurred to her that she had never seen Thibodeaux’s arms or legs, much less his chest. Every other man and woman in the squads wore shorts and short-sleeve shirts except for Thibodeaux. Her curiosity was as strong as any other healthy, young woman’s would be. She started needling him to get him into the water.

“I can teach you” Alexandra said.

“I didn’t say I couldn’t swim” Thibodeaux threw back. “I said I don’t swim.”

“We got snapping turtles and gar-pike and stingrays and da itch” Thibodeaux told her. “An dat is just what is in da water.”

Still, she refused to relent.

Thibodeaux was extremely leery of becoming involved with any of these Northern, university girls. They were nothing like the girls down-south.

Back home, Thibodeaux could take a girl on a date and they would both have a good time. And that would be the end of it.

The girls up north were an entirely different species. Oh, the going out and having a good time was much the same. But there was a real risk the girl would be in the Human Resources department the next day or next week.

Or she might come back two months or two years later and claim she was going to make life difficult if Thibodeaux didn't do something for her.

Thibodeaux knew that there were risks to having a good time. He always used protection but he knew even that could fail. If it did, he would cheerfully uphold his responsibilities. Thibodeaux understood those kinds of things.

But Alexandra was cute in a lissome, gymnast kind of way. And she kept picking at him like she was starved for attention.

Thibodeaux couldn’t think of any other way to get her to shut up. So he shucked off his boots and waded into the water fully clothed. The way he figured it, his clothing needed a good cleaning too.