Paulus Potter (b. 1625-died 1654) was a Dutch painter who painted with photographic precision. He produced approximately 100 painting before dying of Tuberculosis at age 28.

A great many of his painting show animals, a meadow and buildings. It is presumed to be the "commons" near Amsterdam and the dwellings of the people who watched those animals. 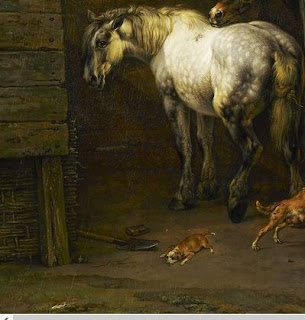 Detail of lower-left corner showing a tool, a pup, a heavily muscled draft horse and the construction of the barn. The wicker lower portions and the planking from approximately 24" up are notable. One to keep out foxes and cats. The other to keep thieves from stealing the animals.

Wicker as a construction material can also be seen in this picture near the peak of the roof. While the wicker in the image is not sufficiently fine to keep out insects, it may be optimal for spider webs! 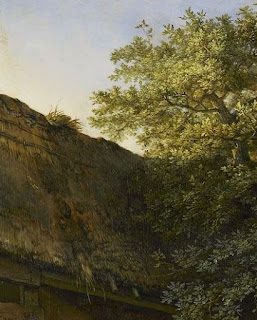 Detail of upper-left showing thatched roof, battens to give roof wind resistance and an oak tree. The trees of Paulus Potter are nearly always willow which are pollard or oak trees that show damage from lightening strikes. 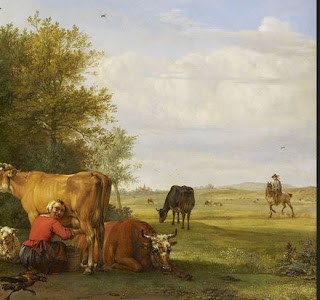 The milk-maids in Paulus Potter's paintings don't use a stool when milking. Presumably, the "commons" is a flood-plain. It shows signs of over-grazing. That is, very short grass and taller, less palatable weeds.

It is possible to identify the bird in the image as a swallow, a genus that is common where large amounts of livestock and their manure produce clouds of flies.