"Improvements" to the dehydrating set-up 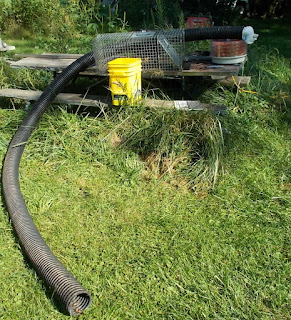 Is there an engineer alive who cannot look at a simple, elegant system and think "I can make that better"?

I moved the food dehydrator off of the porch which is on the north side of the house and put it on the picnic table in the center of the yard.

After scratching my head, I decided it really NEEDED an solar air pre-heater.

I had 16' of 4" diameter (5" OD), black, corrugated drain pipe. Black is good for collecting solar energy.

I did a little bit of measuring:

I cut a 5-1/2" long piece with the end on the slant like the pointy end of a hypodermic needle. That was so when I assembled the device I could not bottom out the edge of the short, white pipe to the inside wall of the black drain pipe.

The next improvement will be to move the picnic table about 8' to the south so it is exposed to sunlight for a longer period during the day. You can see from the first picture that it is in the shade.

The cooling for the electric motor is in the bottom of the unit and does not draw its cooling air from the top of the unit.

The unit draws 300W and the motor probably draws about 40W. So most of the energy draw is to heat the air swirled through the unit.

If the grid gets shaky, then it would be stupid to use solar generated electricity to make heat when you can get it directly from cheap, dumb plastic pipe and/or plastic film. 300W can drive 7, 40W fans but only one dehydrator.