Belladonna came over and kept us company this past weekend. It was cozy, with the four girls.

Bella suggested that we watch a movie that she enjoyed, The Gray Man.

For those of you who attempt to go-gray and blend in, you will NOT learn anything from this movie. Trust me, leaving a trail of crashed cars/planes/trains, and scores of dead bodies in your wake is no way to blend in and stay invisible.

One egregious no-no was when the hero made a bomb and floated it on the water to take-out the hit team. He dove under the water to avoid the blast. The general consensus of people who know about these kinds of things is that water is more efficient at transferring shock-waves and waves do not behave in a 1/r^2 way when confined by masonry walls. Lungs and ribs become the frangible link in that system.

There were scads of other semi-miraculous recoveries from concussions and stabbings and events that should have broken his ribs and legs. But hey, he was "freakishly good" at what he did, which was kill people. Maybe that confers the power to heal quickly.

One other no-no was that he wore the same, distinctive red-striped windbreaker for much too long. Yes, I understand that the audience needs to be able to pick him out of the crowd trying to kill him...but if you need to be "gray" do not wear anything that is both unique and distinctive from a distance.

My Physical Therapist was in a fine mood today. He was able to hear how the new exercises flattened me.

He made adjustments. He reduced the number of reps per set and told me to alternate "off days" and "on days" for the most challenging exercises.

Part of his joy is that he is a traveling PT guy and his next gig is about as far from Eaton Rapids as you can get and A.) Still speak English and B.) Be on the surface of the globe and C.) Not be in a third-world country. If he lands this next gig he will be approximately 9400 surface miles from Eaton Rapids, Michigan. 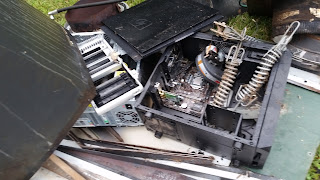 I have two boxes of very rare, semi-conductor chips. I know what I have here. Asking $500. No low-balling. Some disassembly required.