WindyWyo wrote "Ultimately it all comes down to conversion factors and feed efficiency."

And Michael responded "No, it doesn't NOT come down to conversion factors. My chickens eat things I do not want to eat. They clear my garden from unwanted bugs that eat my crops. Thus, I don't use as many toxic poisons to keep my garden reasonably safe from them. My chickens eat from the multi-species pasture I run. Thus, eliminating much of my need to use toxins to deworm my critters.

"Modern Industrial Farming" is profitable in the short run as History thinks but soon reduces the soil from a living self-regenerating system to a near sterile dirt that merely supports the heavily sprayed for bugs and weeds fertilizer fed structure...."

They are both right. 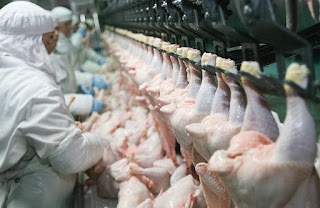 Within the narrow, financial context of industrialized, intensive farming Windy is absolutely right.

Industrialized farming is capital intensive. There is a ton of debt to service or a legion of shareholders who demand growth-and-dividends. The structure is animated by hordes of people, all of whom demand wages and benefits.

Intensive, industrialized agriculture is similar to a high-speed plane, flying close to the ground. Things happen quickly. The metrics are simple and relentless:

These narrowly defined measures are susceptible to various kinds of traps.

One of those traps is that fixed-costs are not fixed when production levels pass certain benchmarks. A chicken processing line can only travel so fast if humans are to perform their assigned operations. If more volume is to be accommodated then the line must be split and more stations (floor space and conveyor) must be added.

The other half of that trap is that variable-costs are not necessarily variable when production levels drop. You cannot lay-off half of your maintenance crew or only clean up half as often after the production in your chicken processing plant drops. It doesn't work that way.

Another issue is that variable-costs don't disappear when production levels drop or a plant closes because it is "inefficient". Those costs are transferred. People don't stop eating or paying their rent. They go on unemployment/welfare/disability; sometimes temporarily and sometimes permanently.

Another transferred cost are the nutrients being stripped from Peru (fish meal) or soil erosion in eastern Iowa (corn and beans) or a myriad of other places. Those costs do not show up in the corporations' quarterly reports.

A third issue is that the capital flows dwarf actual operating profits and can mask operations that are not viable when capital is flowing in or can swamp viable operations when interest rates rise and debt cannot be rolled-over.

Within the long time-line Michael is right. 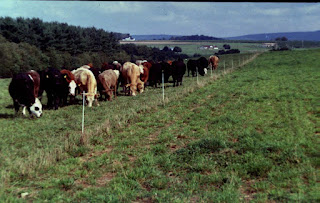 Free-range cattle, for instance, have a protein conversion ratio of about 4% vs. confinement chicken and aquaculture's ratio of 25%. The reason that free-range cattle is a viable industry is that it is extensive rather than intensive.

The cow harvests its own food and spreads its own waste. In most of the world requires no shelter. It may need hay in the winter or maybe it can be turned loose in picked corn fields or the grazier can carefully parcel out "stockpiled" pasture to get it through the winter in areas where heavy snows do not crust over.

His "monthly nut" is microscopic compared to confinement operations.

Conversion ratios still matter in extensive systems. Reed Canarygrass makes an impressive pasture but you are not going to be able to pay your property taxes if your cattle will not eat it. The point is that the extensive agriculturist is like a plane flying 500 feet above ground vs  intensive agriculture's tree-top elevation. It isn't stress-free but there is time to think and respond when things happen.

Conceivably, carefully managed pasture could remain healthy for five centuries with little more input than an electric fence or hedges, movable watering containers to move concentrations of poop-and-pee around...and salt. The export of nutrients can be offset by feeding imported food (hay, grain) on the pasture.

The soil remains covered with green, growing plants so it is always capturing organic content. The "burn-off" of soil organic matter is related to erosion and soil temperature. The densely woven root system of the sward and the efficient capture of sunlight and water transpiration mitigate against both loss mechanisms.

The soil becomes rich in bugs and worms. Birds and other wildlife visit the pasture. Bees and other pollinators adore the clover and incidental forbs growing there.

Posted by Eaton Rapids Joe at 8:26 AM