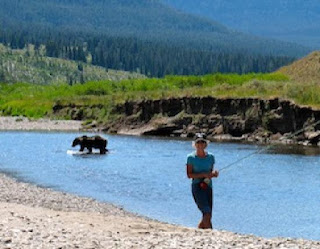 A man and his girlfriend were avid fly-fishermen.

They planned a fishing trip to the Madison river in Wyoming. After fishing for a few days, the man asked his GF why she did not seem spooked by the heavy grizzly bear population.

She showed him the .38 snubbied tucked into her ISW holster.

He scoffed "That won't stop a grizzly bear."

She replied "It doesn't have to. All I have to do is shoot you in the leg. I will be fine as long as I can outrun you..."

I had somebody ask why I was pushing so hard in Physical Therapy.

The philosophical answer is "Because that is how I am wired."

The practical answer is because most human predators are wolves and hyenas, not bears.

Wolves hunt in packs and have been known to kill for enjoyment.

Avoiding trouble is more than "Not being the slowest buffalo in the herd". Safety is found by being free of the cues the wolves search for while they go through their victim selection process.

I have been walking at least a mile every day. The track is 9 laps-to-the-mile.

I have been doing a set of push-ups every lap. My motive is strengthen my entire body because everything got weaker while I was recovering.

After the interaction I had with the granny who fell off of her bike and could not get back up I have been very intentional at getting back on my feet after my push-ups.

At nine-laps to-the-mile it gives me nine repetitions of smoothly rolling into the genuflecting position, i.e. injured leg with foot flat on the ground and good leg with knee and toes on ground, and then continuing into a full standing position.

After working out, Mrs ERJ, Southern Belle, Quicksilver and I went to the local Walmart for a few items. The checkout lanes were long so I played the "my leg is sore" card and sat on the bench by the exit.

The store was very busy.

Southern Belle and Quicksilver joined me and we started chatting with the woman I was sharing the bench with.

The woman volunteered the opinion that the store was getting a lot of traffic because they were battening down the hatches for the looming recession.

My take was that some of the shopping was back-to-school shopping and I offered that opinion.

She responded "Maybe so, but I saw a lot of "staples" in the carts pushed by other customers. I think people don't want to look at their pantry shelves this winter and see Old Mother Hubbard's cupboard."

She also said "If you burn LP for heat you best be seeing about getting your tank filled. Or if you burn wood you best cutting it and stacking it high."

Today was the first time I had a total stranger volunteer such a bleak view of the future. Random chance or is the wind shifting?

We have an awesome washing machine that processes huge loads and uses almost no water at all. It lacks an agitator so the clothing receives almost no wear-and-tear while in the machine. It spins the clothing at the end of the cycle at speeds approaching cyclotrons used to accelerate sub-atomic particles so they spend little time in the drier. It is fully compliant with California edicts about water use.

It has only one flaw.

It does not remove the dirt from the clothing. Mrs ERJ claims her clothes come out of the machine dirtier than when she put them in.

Does anybody have an opinion about a traditional washer with an agitator that actually removes dirt from clothing.