Why should Public Property have restrictions attached to its use? 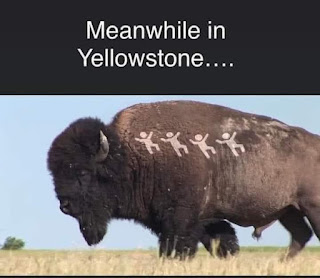 Reader Mind Your Own Business commented "Why should something that is essentially public property (e.g., a parking spot) be priced in ways that make it more painful for them (less affluent people) to utilize? There are lots of prices that are so high that they shut out whole groups of people from gaining access."

Two images kept popping into my head as I let this question incubate overnight.

One image was of bison being shot from passing trains in the early days of America's western expansion.

The second image was of serve-yourself recycling bins filled with bags of household trash.

Resources that appear to be infinite

Some resources are so vast as to appear to be infinite. The common myth of the American bison is one such resource. There appeared to be so many of them that it was inconceivable to the people of the time that human harvesting could make a dent in the population.

That leads to the kind of thinking that leaves the hot-water tap running continuously so the users can have instant hot-water. This kind of thinking nearly always occurs among the classes who do not have to pay the utility bill.

If you grew up thinking that you should have instant access to hot-water then you will get testy when you encounter limits.

History demonstrated that the bison population was not infinite.

If every person who wanted to eat buffalo burgers was allowed to kill a Bison because the Grand Duke of Arsch-Lenker paid $10k to kill one on safari then Bison would be extinct and nobody would ever be able to see a living one. Furthermore, the genetics would be unavailable should it ever be desirable to ingress Bison genetics into domestic cattle.

Eaton Rapids recently announced that they are discontinuing their public recycling program.

The program was fairly economical and low-tech. They had separate bins for clear glass, green glass, brown glass, steel, aluminum and plastics.

Civic minded people who wanted to save the environment were expected to separate their recycleables and put them in the correct bins.

Eventually, some folks realized they could drive up and pitch bags of unsorted trash into the bins and then drive off. That saved them the cost of properly disposing of their trash.

Any resources, even one that is of very low value, is subject to abuse when it is tossed into the public domain without "guardrails" around its use. Some people are going to bitch about the restrictions regardless of how much prior abuses justify those restrictions.