Pearson's square is a simple way to calculate the relative ratios of two components to hit a target for a single nutrient.

For example, suppose you want to blend feed for laying hens with 18% protein and you are mixing cracked corn with 8% protein and soy-grits with 35% protein 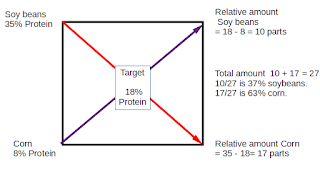 Then the target percentage, which must be between the that of the two ingredients, is placed in the center of the square.

The feed blender works on the diagonal. Whichever is lower, target or component is subtracted from the higher and place at the opposite corner of the square.

This is done with both components individually.

The result of the subtraction (the number in the opposite corner) is the relative amount of the OTHER component.

It is difficult to over-emphasize the importance of stating one's assumptions when looking into the future. That is because, should somebody want to bend the answer to a desired result, it can most easily be done by "adjusting" the assumptions*.

Let's put those assumptions together and see where they lead us.

Suppose you can get grain but not beans/lentils/peas; how much meat would a person need?

Assuming that a total break-down in society meant that you can only find whole grains (actually to your benefit because the germ is rich in Lysine) a typical adult will need about three ounces of meat a day (when added to the Lysine in the grain) meet their daily need for Lysine.

That is one chipmunk or two starlings or four sparrows; gutted with the heart, kidneys and liver tossed back into the stew-pot. Birds plucked and chipmunk skinned. Bones strained out and everything else eaten.

*Expect authorities to change definitions as they lose control of events. We already saw this with the definition of "Recession". Expect them to dramatically revise downward recommended Calorie intake, protein allowance and other key metrics.

That is why it is important to write things down on paper. They cannot revise a page sitting in your three-ring binder.

**I am living in Mathematical sin by combining English and Metric units. I accept that I am a flawed human. I used the units I thought are most familiar to my readers.
Posted by Eaton Rapids Joe at 8:35 AM