One of the standard jokes in the financial industry is that if you have a shaky investment you can always sell it to a doctor.

The thinking is that doctors have a lot of money and not a lot of time to do "due diligence". They are also very smart at what they do and often fall victim to thinking that expertise in one area automatically translates into expertise in other things. Finally, doctors function in a  chain-of-command environment and have a high regard for authority and the symbols of authority.

The rest of the standard joke is that if the product you are trying to peddle stinks so badly that even doctors will not buy it, then sell it to dentists. Not that dentists are "dumber" than doctors but that their scope and experiences are narrower. They are more "naive" than doctors. 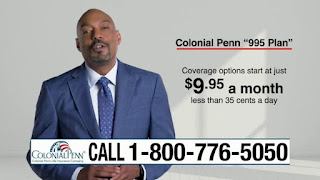 Is it out-of-line to suggest that financial products that seem to specifically target older, African-Americans might stink?

Their default contract will not pay-out if the insured dies in the first two years of "coverage". Most contracts automatically expire at age 80 which is about the life expectancy of a sixty-year-old; so there is a fifty percent chance you will not die in the period the contract is in effect. Furthermore, people who filed claims say that the process is tortuous and takes a very long time.

It begs the larger question: If a company is hawking any product by blatantly targeting traditionally naive customers...is it possible all advertising that use actors that appeal to traditionally naive customers are peddling products that "stink"? If the products offered exceptional value or customer experiences or timeliness...wouldn't the advertising be pointing out those benefits rather than relying on appeals to loyalty?

No wonder the EU is failing 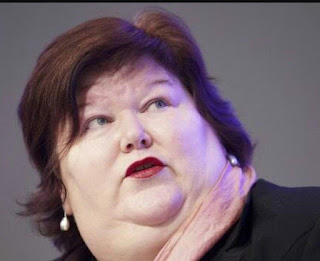 A commenter at Filthie's Thunderbox suggested that we look at the picture of Maggie De Block, the Belgian Minister of Social Affairs and Health.

The EU headquarters is in Brussels, Belgium. Minister of Health?!?!

Posted by Eaton Rapids Joe at 6:15 AM