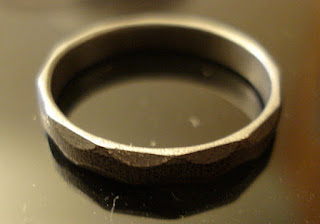 Should you be privileged to know any Canadian engineers, you might notice that they wear an iron (or stainless steel) ring on the pinky of their dominant hand.

That is not an accident. The ring is there to remind them of a story and is a physical reminder of their obligations as an engineer.

Anvil, the Hammer, the Chain and the Ring 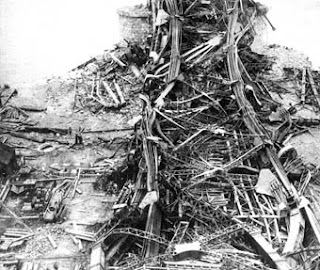 On August 29, 1907 the southern span of the bridge over the St Lawrence river between Sainte-Foy and Lévis, Quebec collapsed killing 75 workers.  Source

Like all spectacular failures, there were many cascading-failures that came into play. Different tellings of the story will emphasize different links in the chain-of-failure as many lessons can be gleaned from the event.

Today's lesson is that there were precursors to the failure. Beams were bending, rivets were shearing, junior engineers were making calculations that suggested gross-underdesign. The senior engineers in charge of the project dismissed those signs and continued the project without review, without modification to the original plans. Ego has a momentum all its own.

Reviews after the disaster revealed that the most fundamental, back-of-envelop, Euler-buckling calculations (had they been done without error) would have shown the beams selected for the span were incapable of holding the weight of the span itself, much less carry any traffic.

The brew bubbled-and-brewed for about two decades and found a resolution in a ceremony that University graduated engineers have the option of attending. It is engineering analog to the Hippocratic Oath administered to medical doctors. It lays a burden on the newly graduated engineer to double-check his assumptions and calculations, double-check his math...and then if his finding contradict the popular narrative and life-and-limb are at risk, to storm the gates of Administraium. Egos and rank and status be damned.

Which brings us to the comments that showed up in the post about Low Voltage Sources for diagnosing fencing shorts.

Dr Jim and Mr B took me to the wood-shed. I listened.

Not only did Dr Jim redirect me, he also supplied a link to a component on Amazon that is appropriate. THAT is professionalism personified.

The original post will be deleted except for the header and a link to this post. That will retain the comments and provide a path to the appropriate way to handle the problem should anybody remember the original post and go looking for it.