Yesterday and today's project is to build and install nest boxes for Tree Swallows.

I had been feeling pretty good about how few Japanese Beetles were in my grape vines. I attributed it partially to the wet spring rotting the pupating beetles and partially to a robin nest in a pear tree near the west end of the orchard/vineyard. Those baby robins eat a lot and the grape vines were the closest source of an easy meal.

Rather than leave birds nesting in my orchard/vineyard to chance I decided to put up some nest boxes for one of my favorite birds: Tree Swallows. 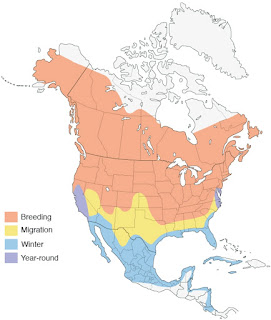 As you can see from the range map, Tree Swallows breed in the northern half of North America and Michigan is pretty close to the middle of the range.

Not only are the Tree Swallows likely to eat a bunch of Japanese Beetles but they will also eat biting flies on cattle.

Having been an engineer in a previous life, there is no design that I cannot make better. Or, if not better, more complicated. 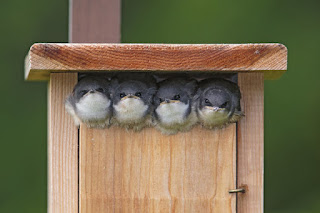 Instead of a hole, I opted to go for a slot. Advantages discussed HERE. The primary advantage is that a properly sized slot is more effective at excluding English Sparrows than round holes. English Sparrows are probably the #1 cause of small, cavity-nesting bird reproduction failures.

It is also easier to construct.

The second modification was to use a common "gutter outlet" typically used to connect down-spouts to gutters as a raccoon guard. I used the 3" version but the 4" version would probably be better. 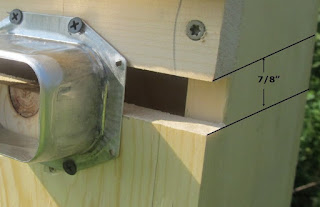 I screwed the top piece on first (a 1"-by-2" piece). Then I used the shim to determine how low to put the bottom piece of the front.

The other minor modification was to not rip standard 1-by-6s to 5 inches. It seemed like non-value added work.

This box was the beta version. Now I have eight more to crank out. I don't expect any swallows to nest in them this year but they will be waiting for them when they come back next spring.

In the "For what it is Worth" category, Tree Swallows are not highly territorial. They will accept nest-boxes that are 100 feet away from another pair of nesting Tree Swallows.

House wrens are the other small species of cavity nesters that might use these boxes. I like House Wrens and will be fine if they take advantage of some of the boxes. 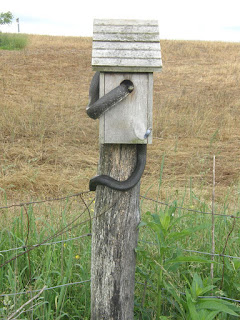 We don't have many rat snakes around, so I don't expect them to be a major predator of the Tree Swallows.