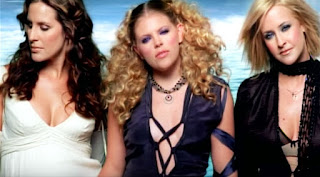 The Dixie Chicks recently changed their name to The Chicks because somebody told them that "Dixie" was charged with racist nuance and overtones.

Encouraged by TDC's eagerness to appease people who don't listen to their music, the LGBTT (Lettuce, Guacamole, Bacon, Tomato on Toast) lobby informed TDC that the letter combination "ck" reinforced the oppressive, binary, cis-normative patriarchy and had to go. However, the letter "t" was a gender-neutral, acceptable alternative.

TDC lost no time pandering to the BGBTT crowd.

They are henceforth to be referred to as "The Chits".
Posted by Eaton Rapids Joe at 7:24 AM