Is Biden a Communist? 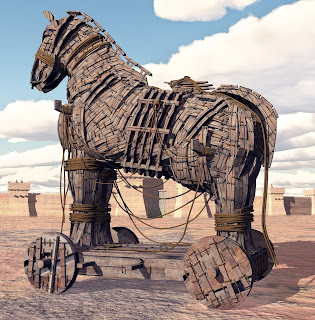 I had a chance to spend some time with Southern Belle today.

Southern Belle works in the Miami-Dade region of Florida.

I asked her what she thought of Biden's chances of carrying Florida.

She informed me that a huge part of how that plays out hinges on whether the citizens of the great state of Florida see Biden as a Trojan Horse for the Communists.

Fidel Castro, Hugo Chavez and the Sandinistas hopelessly polluted the "communist/socialist" brand, at least in the eyes of Floridians.

If Biden is seen as a brainless puppet and the presumed puppet-masters are Socialists, there is not a snowball's chance in Hades of Biden winning Florida.

If Biden is seen as a spunky politician who is mentally agile and beholding to no man (or woman) then he will win.

The Establishment saw Biden as more salable and more tractable than Sanders.

But to keep Sanders' followers in the party, the Establishment had to make promises. Some are public. Others are not.

Let's look at some of the public promises.


Biden is a staunch supporter of the Affordable Care Act (ACA)

Former vice president Joe Biden’s $4 trillion tax plan would raises taxes on higher income households both in life and at death, according to analysis by the Tax Policy Center. (Note: Biden Wikipedia page is completely silent on his plan to raise taxes) Source

According to Jonathan Chait

Biden was ... was asking them (the wealthy) to take a hit to their after-tax income in return for buying social peace, but that the sacrifice would be finite — he would not confiscate their homes or end their livelihoods. Indeed, last week the Tax Policy Center published its analysis of Biden’s plan to increase taxes on the rich. The plan would raise $4 trillion over a decade, making it — if enacted — one of the largest wealth transfers in American history.


Since that was written in March, Biden's policy has been clocking steadily to the left as he courts Bernie Sander's followers.


Biden began issuing a raft of new proposals that move his positions closer to the progressive wing of the Democratic Party, with a promise to unveil an even more transformative economic plan this summer.  Source


The word "transformative" is one of those Progressive buzzwords that translates as "Ignores language in the Bill of Rights that prohibits seizure of property without due process".

The point is that voters vote for the candidate and have to guess at what the candidate's handlers will do once they are in office.

With Trump, what you see is what you get. He is a loose cannon and has little restraint when taunting his opponents. He is a bar-room brawler. He uses common language. He clearly values America over some shapeless, "world order". I doubt that will change during a second term.
Posted by Eaton Rapids Joe at 5:30 PM