An engineer in Seattle was getting ready to board a jet airliner.

As he looked out the window at the parked plane, he noticed a crew swarming up ladders and fanning out across the wings. They also leaned ladders against the fuselage.

The men appeared to be doing something with power drills and buckets.

The engineer, being from Seattle and all that, knew a thing or two about airplanes and could not think of any kind of maintenance would require that many people and those kinds of tools.

Beckoning a person who worked for the airline, our intrepid engineer asked what was going on.

"Those men are the chronically homeless and the Federal Government is subsidizing the airline to employ them" the airline official informed him.

"But what are they doing?" the engineer asked.

"They are drilling out every third rivet with a rota-broach and we are selling them for scrap; getting $2.00 a pound I might add." the official said, proudly.

"Why would you DO that?" the engineer sputtered.

"We called up the manufacturer and they informed us they designed all of their equipment with a 30% factor of over-design."*

From a 40-year inspection report

Stringers: . . . The stringer ends have surface rust corrosion at the expansion joints. . . . The bolted connections to the floorbeam trusses are ‘working’ and some bolts are loose or missing.

Roller nests and expansion joints: . . . In span #2, multi-beam approach span, there is a cantilever expansion hinge with sliding plate bearings. The joint is closed beyond tolerable limits, possibly due to substructure movement & pavement thrust and is no longer functioning.

Due to the ‘Fracture Critical’ configuration of the main river spans and the problematic ‘crossbeam’ details, and fatigue cracking in the approach spans, eventual replacement of the entire structure would be preferable.


It is interesting that the substandard welds were not recognized until the forty year inspection. 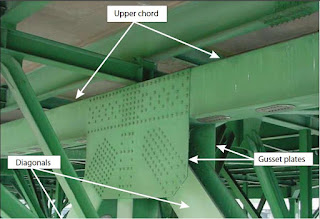 The root cause of the bridge failure was determined to be some undersized, i.e. material too thin, gusset plates.

The National Traffic Safety Board assigned the blame to design.

I have a friend who believes otherwise. He heard through back-door sources that most of the gusset plates were 3/4" thick while some of the gusset plates on the span that collapsed were 3/8" thick. He said there is no documentation or engineering work orders authorizing the thinner plates.

Evidence suggests that we are worse off today (in terms of construction and fabrication skills) than we were in 1965 when the bridge span was built.

Posted by Eaton Rapids Joe at 7:39 AM