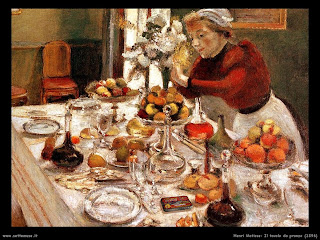 This painting shows a mastery of light interacting with liquids and various glass shapes. There are nine carafes of various size, material and contents and a minimum of seven, crystal goblets. Matisse clearly loves the voluptuous shapes of carafes, fruit and even the woman fussily adjusting the flowers.

An anthropologist, looking at this painting would conclude that Frenchmen survived in 1897 by drinking wine and eating pears, rolls and sardines.