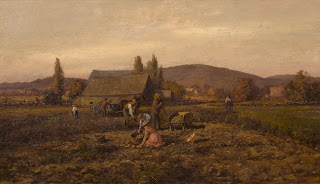 Born on the family farm near Chesham, in what is now the Pottersville section of Dublin, New Hampshire on March 6, 1848 to mother Mary Phelps and father Jayson Phelps. "Preston", as he was known, grew up helping out on the very active family farm. Preston drew constantly, when he wasn't tending the animals or mowing the fields.

Phelps was a plein air painter, that is, he would set up an umbrella and paint what he saw outside.

This painting captures the social nature of harvest. One senses that the potato field is not much more than a half-acre. One notes baskets, a wheelbarrow, bags and a horse-drawn cart each with their own human(s) in attendance. In the near-background we see the bright green of carrot-tops on the left side of the image.

The young man in the blue shirt (foreground) appears to have lost his hat in a sudden gust.

Fences are low and built of stacked fieldstone and wood.

Fences are low. The trees appear to be Lombard poplar or fastigate forms of sugar maple. The low mountain in the background is denuded of trees on its lower reaches.

Phelps is known to have painted in Bavaria, France, Scotland and New Hampshire in that time period. The Lombard poplars and the absence of goldenrod in the background suggest this picture may have been painted in Europe.

And remember, stay away from crowds.
Posted by Eaton Rapids Joe at 6:00 AM