Insanity has been defined as doing the same thing over-and-over again and being surprised when the outcome does not improve.

I moved about thirty persimmon seedlings into a row in the garden about two weeks ago. They promptly fried. I had about four survivors.

Southern Belle is a project girl. She was more than happy to help me move some more. 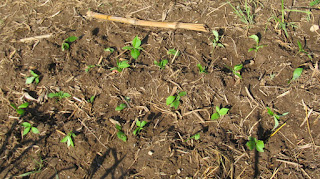 We moved them last night. I did the shovel work. S.B. did the bending over work. We planted them in fours, about 6" apart in each direction.

All told, we moved about 80 seedlings.

My hope is the seedlings will grow through the straw even as the mat compacts.

The picture in my head is that they will receive much less sun loading, almost zero wind (which can dry them out in a New Yawk minute) and that the mulch will hold the humidity from the ground close to the leaves.

It will take a few weeks to know if I am successful. By then, the roots will have integrated into the soil and the seedlings should be growing with joyful abandon.

Parentage
I have persimmons on two ends of my property. The south end has seedlings and grafts. Some of the seedlings are male.

On the north end of my property I have all grafted trees and two males. One male is "Szukis" which is a switch-hitter. That is, it is a male that produces some fruit.

The difficulty in growing seedling persimmons and hoping for good fruit is that it is impossible to know if a given male is likely to produce "spitters" or "smile-and-swallow" fruit. "Szukis" produces good fruit and has a track record of a high percentage of good progeny, especially when paired with Juhl or similar persimmons.

The other male branch is one of Jerry Lehman's selections. He was kind enough to sell me persimmon scions. I told him I had a half-azzed interest in breeding persimmons and asked if he would be willing to sell me a male that he thought had potential. The exact experimental number of the male that he sent me is lost in antiquity, but the branch is still alive and grafted into a tree that is 90% Morris Burton.

These seedlings are almost certainly to be Morris Burton pollinated by Jerry Lehman's male.

He tasted the fruit and decided it was good enough to propagate.

The first few years that Jim Claypoole was hybridizing, he used Morris Burton heavily (it is a parent of Dollywood) but then he drifted away from it.

Morris Burton fruit are smaller than most cultivated American persimmons. It is slightly more likely to produce progeny that have cosmetically ugly specks of tannin.

And then Lehman noticed that a few of the Morris Burton offspring could be eaten before they were dead-soft. That is, they were so low in tannin distributed at the cellular level that they could be eaten like tiny apples.

Suddenly, Morris Burton pollinated by one of Lehman's "elite" males sounded like a wonderful rootstock for grafting.

Suckers
The thing about American persimmons is that they sucker profusely. You might plant a grafted persimmon but in time, your tree will be overwhelmed by a thicket of suckers that spring up from the rootstock.

Most of these persimmons are likely to end up in plantings to attract deer. I want the rootstock to at least have the potential to produce good-to-excellent fruit for human consumption.
Posted by Eaton Rapids Joe at 9:59 AM