I had a conversation with a young person. She informed me that saying "The United States of America is the best country in the world" without data made her want to argue.

It was a statement of "show me the data".

She has no issues accepting that the United States is in the top quartile, but to say it is the best....

I asked her what countries she thought were superior to the US, and she named three. I will talk about those countries in a later post.

Too many metrics
Too many essays that rate countries become super-tankers full of bombast. They try to impress by incorporating hundreds of metrics in sorting through the countries.

The risk in choosing a hundred human-rights issues is that you might inadvertently over-weight human rights issues over, say, your ability to make a living. Unless you are a trans-gendered, married "man" and are looking for a doctor to perform a vasectomy, then do you really care about the fringe of transgender "equality" issues?

The purpose of this essay is to take a first swing at a rational package of metrics that will be compelling to a twenty-something, college graduate woman. 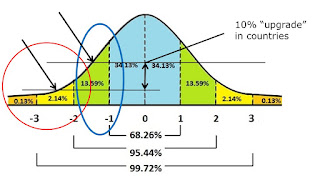 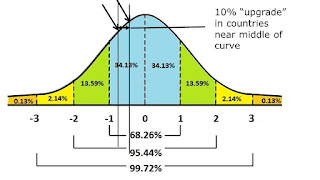 The effect of moving up 10%ile points if you are in the crowded middle is far less marked. In fact, you might have a hard time getting agreement, is "Ireland "better" than Portugal?" Some people adore the sun and will insist Portugal is superior. Others like cozy pubs and will insist Ireland is better.

The costs of moving between Portugal and Ireland is likely to not be recouped in improved quality of life. Why bother moving if your education is not respected, you need to learn another language and you lose family and professional connections if the gains are very incremental?

Other
-Typical weeks of vacation per year
-Maternity leave policies

What do you guys think? You are my source of "the wisdom of the cloud". What am I missing? What should I leave out?

Posted by Eaton Rapids Joe at 9:55 AM