It behooves the animal husbandryman and grazier to study his pasture with the intention of being able to estimate the amount of standing dry-matter per acre.

I just moved Sprites seven calves from my largest paddock to a fresh one. There was still forage available but had been trampled and shat upon.

The paddock is approximately 1.2 acres in size and according to the text messages Sprite and I swapped, they have been on it for eleven full days.

That is not a very impressive number for a mixed grass/clover pasture. I expect to get two more rotations across it before the grazing season is done.

Making paddocks smaller increases the usable dry-matter per acre because less of it is trampled and less of it is rejected due to the palatability issues that trampling creates.

I need about eight more fence posts to split that paddock in half. It will also be worth my while to replace the redtop grass with almost anything else. This might be a good place for an endophyte-free Tall Fescue like Tuscany II or Courtenay 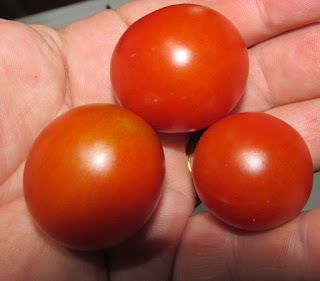 Stupice. Not very big. First picking. I will comment later on how much I like or do not like this variety. I need to live with it a little while before I decide. 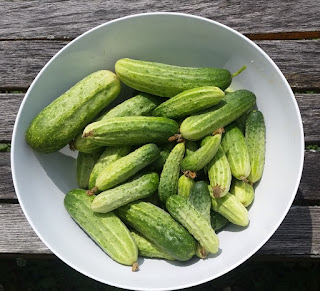 First picking. OK, I lied. I ate one the other day and it was bitter. I was not impressed. While cutting these up for pickles I tried another. It wasn't nearly as bitter as my first. Perhaps the first one was a weirdo.

I wish I had a way to cram more pickles in a jar. These filled four quarts.

I am not the only one with this problem. I bought a jar of gherkins a week ago and after eating all of the pickles the jar was more than 50% full of juice. Maybe even 60% full.

I am starting with the recipe from HERE but already am thinking that I prefer more vinegar and less salt. I also left out the allspice and coriander and added garlic.

No evidence of visits from Trash Pandas 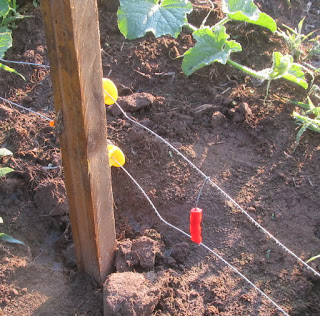