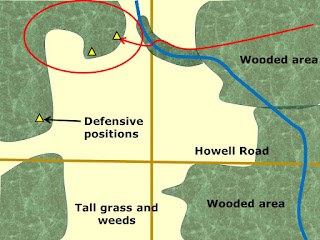 The invaders were slipping westward and inspecting the decoy defensive positions.

The stealth came to an end when the found the first real one. The two inhabitants went down in a flurry of bullets from the invaders handguns and the remaining invaders started vectoring toward the sound of the shots.

Fifty yards up-slope, Keagan and Wyatt didn’t even bother with their handguns. They started shooting with their AR-15s and immediately became the focus of the hundred aggressors.

Ten-double-ought was the code for defenders down, fight actively underway.

Both Wyatt and Keagan could aim and hit with as little conscious thought as sombody could slap a mosquito. Unfortunately, there were a hundred mosquitoes and only two of them. The next closest support team was four hundred yards away and there was a steep-banked valley and a grassy meadow between them. The path that did not expose the other team to fire was much longer than 400 yards.

The voice transmission came with a GPS envelop that gave the coordinates.

Tory was turning out of the loiter pattern and cranked up the power to push the plane faster.

Her first pass at 3000 feet showed little. The new shoots and leaves on the trees were too thick. She banked sharply and tipped the nose down. She leveled out at 500 feet above ground and Shelly felt sick to her stomach. Shelly didn’t know if it was the acrobatics, the thought of “her guys” getting shot up or the fact that they were now in range of ground fire.

Shelly furiously transcribed the location of the defenders to the positions used by the mortar crews.

A mortar crew on Denis road, a mile north of Keagan and Wyatt were the first to respond. “Can you give us laser targeting?”

“Let us know when you have them lit up” the Denis road crew responded.

Tory didn’t know how steeply the shells would be reentering and she didn’t want to be in the path. She scooted the plane a half-mile east and then nodded to Shelly.

A couple of seconds later another voice broke into the conversation. “Can you illuminate fifty yards east of the Keagan’s position?”

“Sure.” Shelly said. The laser pointer was on a wooden stock with a scope. The infrared LASER which is not visible to the human eye was co-aligned with the scope.

Except for maximum range volleys, there are always two “trajectory solutions” when firing artillery. One solution is the high arching shot while the other is a flatter, line-drive.

When the mortars had bombarded the truck convoy three days earlier, they had used the high-arching solution. That put the maximum amount of the shrapnel at the height of the targets but the shrapnel was spread in a 360 degree arc that indiscriminately peppered everything in range. That worked great as long as assets were not mixed in with the targets.

Supporting Keagan and Wyatt demanded the other solution.

The flatter, line-drive trajectory laid a downward spray of shrapnel, a ribbon of smoking-hot iron in a tightly controlled band. A smaller percentage of the shrapnel was target bound as much of it went upward.

The mortar crews worked like maniacs screwing the optical fuses into the noses of the mortars. This mission caught them by surprise.

The optical fuse “looked” perpendicular to the shell's its path and when it saw the pulsing laser dot it detonated.

Traveling in from the west, the first round detonated fifty yards from Keagan and Wyatt and cleared a fifteen yard swath clear of invaders. The reason for the small beaten zone was because the ribbon of shrapnel was perpendicular to the column of attackers. The smaller zone was the price of greater precision, precision that allowed the mortar crews to “scratch” Keagan’s back. More shells followed.

“Can you start walking the laser dot east?” the disembodied voice on the radio asked Shelly after they had sent the fourth mortar round down-range.

Meanwhile, the crews to the north and south were doing the same. The crew to the north started 200 yards east of Keagan and Wyatt’s position and worked east. The last thing any mortar crew wanted was a blue-on-blue casualty on his conscience.

The crew to the south started at Kane Road and worked west. The ribbon of hot iron from those shell bursts were parallel to the column of invaders and were devastating to the attackers.

After four minutes, Keagan and Wyatt’s squad-mates were able to join them. Keagan was down but Wyatt was still combat effective.

Keagan had taken a 9mm round through his right lung and had a sucking, chest wound.

Wyatt and his other squad-mates took no prisoners.