Sayed's second offensive thrust was west along Howell Road, a fact that surprised nobody in the Buffer-Zone.

The mortar fire supporting the thrust was not particularly accurate but it was abundant. It was clear that the attackers had some intelligence. They knew where the decoys were. Unfortunately, the wide spread of the incoming fire included some of the actual defensive positions.

Sammy’s sensors indicated the trucks coming in, but it was a small number compared to the number on I-96. He neglected to pass the information along.
Sayed was trained in the sciences, as much as history can be considered a science. He was running an experiment. He had infantry on foot approaching the West Branch 800 yards north of Howell Road.

The sensors were not fused tightly enough to auto-trip.

The attackers on Howell Road were mortaring the shit out of the positions guarding it. Those same positions also guarded Kane Road, the one north/south road that crossed the West Branch.

While the ladder/bridge truck was slowly moving toward the bridge abutment of the demolished Howell Road bridge, a hundred foot-soldiers were crossing at the site of the old Kane Road bridge. A volunteer had crossed the river and tied a cable to a tree on the other side. The fighters waded through the belly-button deep water and spread out on the other side.

After the entire contingent was across the river, they crossed the short section of three-foot tall grass and moved into the woods. The lead elements moved from tree-to-tree as the mortar shells arched over their heads. Their orders were to contact and destroy the defenders.

Even though the mortar teams a mile south of I-96 had destroyed their counterparts on the Buffer-Zone side of the river, they had no foot-soldiers to cross the river and establish a toe-hold and a defensive perimeter.

Lacking spotters to call out targets that were closer to them, they concentrated their fire on the various buildings along I-96. One of their shells scored a direct hit on the building that used to house Sammy and his communication center.

The invasion force that threatened to move up the median of I-96 shuffled back-and-forth but did not cross the 1200 yard line. It was almost as if they were teasing the Buffer-Zone mortar crews to demonstrate the full range of their mortars or to pull the defenders out of position.

The continued firing of the attacking mortar crews a mile south of I-96 caught the attention of Shelly. There are no substitutes for sharp, young eyes and Shelly’s were the best you were going to find.

Once Shelly found them under the hazy green of the shrubbery that was just beginning to leaf-out, it was a matter of thirty seconds to approximate their coordinates on the map and call it in. Then, Shelly called in corrections to walk the shells into the target.

The attacker’s mortar crew had no idea where the shells were coming from. They were not able to counter-battery and they died.

Slowly, the fire-truck eased up to the river and deployed the portable bridge. An assortment of support vehicles were behind it. Several mounted machine-guns.

Just as the truck started to ease across the newly installed bridge, the defenders closest to the bridge drove the plunger downward and blew the far-side bridge abutment. The charges that were lined up for two hundred feet east of the abutment blew sympathetically and flipped the support vehicles.

The defenders had discussed the optimum order of demo several times. The consensus was to blow the far side so the near-side abutment presented a steep, barbed-wired enhanced face to the invaders. 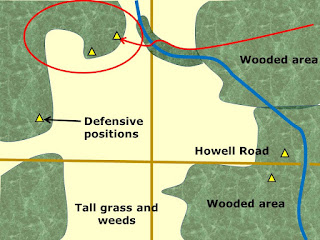 Even as the clods and rubble rained down on the defenders along Howell Road, the advance elements of the invaders who had crossed at Kane Road fell in among the defenders in the woods east of the Kane Road bridge and the killing started.
Posted by Eaton Rapids Joe at 12:30 AM