Belladonna did her taxes today.

This is the first year she did them herself.

I switched from Turbo-Tax to H&R when Intuit, parent company of Turbo-Tax went all anti-2A.

It was a joy to watch her fight with the software

"Why is this so complicated?" Bella asked.

"Because Congress carves out special deals to industries who employ the most aggressive lobbiests or to special interest groups whose votes they are courting." I replied.

She went down one blind alley. The software was asking for a form she had not received. If she could not cough up the info on the form she was going to get fined for not having health insurance.

Bella could not believe she was going to get FINED. Had that branch of software actually applied to her, not only would she not have had insurance, she would have been whacked again at tax time.

Fortunately, she found where she had made a wrong turn.

Bella had a scholarship during her last year at college. She had to report that as income. She got to watch her $800 return turn into an $800 payment.

I tried to help her look at the bright side, "Some young adult who wasn't smart enough to go to college or didn't want to study very hard is really going to enjoy that Obama Phone you just paid for."

I am not sure she appreciated the joy she was going to bring to somebody else's life.

Southern Belle
Southern Belle is working remotely while here in Michigan. Many of her clients speak Spanish as their first language. I get to listen to her leaving messages.

It seems that many of them have the same nickname, "Porky".

She is a project girl. Her first project is to get the riding mower working again. She pumped up the rear tires to see if they hold air over-night. If they don't then we are looking at about $80 for inner-tubes and belts.

Mom
Tomorrow is a "Mom" day. I spend the morning and early afternoon with her. Then I come back and spend the night. 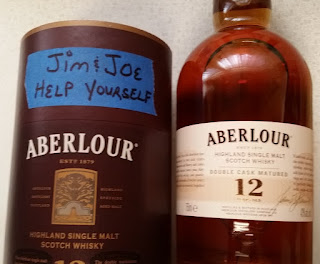 One of my brothers enjoys fine distilled goods. He left a bottle at Mom's for medicinal purposes.

I may be compelled, out of a spirit of scientific inquiry, to sample a wee dram or two.
Posted by Eaton Rapids Joe at 8:15 PM