If the typical gated community in America has 80 homes.

Approximately 7% of the adult population are Veterans of the US military.

Seven-percent of 160 is 11 veterans. It may be higher or lower. Veterans tend to be more successful due to the discipline they pick up in the service so it could easily be higher. Living in a gated community is not cheap.

Two Americans in a thousand die of cancer every year. That might be higher for Veterans because of the chemicals and products of combustion they are exposed to. 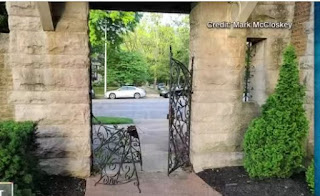 Invading a gated community, even with a hundred protestors becomes a killing field if there is one person who fights. One person who actually aims his weapon and starts pulling the trigger. If they came in through one gated door, then they will all try to leave through that one door.

Think about yelling "Fire!" in a crowded theater.

It is only a matter of time before they tread on the tail of somebody with nothing left to lose. A Vet in end-stage cancer has already made his peace with his maker. The body count will be epic due to the tactical decisions made by the invaders protestors.

The phrase "Shooting fish in a barrel" comes to mind.

*Based on my experience working with people, one-person-in-20 is whackadoodle. I chose the dying Vet scenario because it is the intersection of skill-set, determination and nothing-to-lose.

If you run with the whackadoodle scenario, there will be a shooting before ten gated communities are invaded but the body count will be trivial compared to the Vet scenario.

I do not condone invading others' property nor am I encouraging Biblical body-counts. But as the hooligans continue to press what they see as "their advantage", it becomes a certainty. Small odds combined with large numbers become a big surprise to somebody.