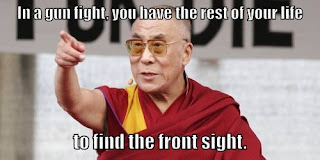 The image that won the Internet for today. I stole it from Dad's Deadpool Blog. It is a must-read site and a great way to start the day. 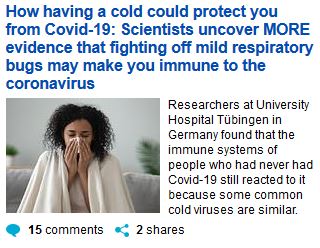 Maybe this cold isn't all "downside".

An opinion editor at a major, national newspaper informed white women they were "lucky" that Blacks were not extracting revenge for...two items that happened before most of them were born and....voting for Trump.

What a buffoon! If she opens the door for one side extracting "revenge" for voting for a candidate they don't like, doesn't tit-for-tat indicate that the other side will return the favor? Thankfully, cooler heads prevailed, but I bet she still has her cushy job.

Bernard's Law of Half-wits applies. CI=(1/2)^n where CI is the Collective Intelligence and n is the number of half-wits.

Foxes
We have a den of foxes on the property. I saw the cubs playing when the grass was soaked with dew. I guess they don't like wet feet. They were up, out of the ground clutter where I could see them. I counted three cubs but there may be more.

I consider this grand, good fortune. I might have a different opinion if I was raising hens. The fox will thin out the rabbit and chipmunk population. Hopefully, there will be fewer ticks next year.

Pretty animals. These seem to have shorter legs and longer bodies than I remember but maybe it is due to their youth.

Road trip to Flint today
Belladonna has to go to Flint to pick up a lab experiment from her instructor. This is the class she is taking from Kirtland Community College. KCC is based in Grayling with campuses in Roscommon and Gaylord. Flint is much closer than any of those cities but I think I would rather drive to Roscommon than Flint.

Maybe I can find a sporting goods store to swing by. I will run out of H-110 in a few days. I have Alliant 2400 which is a fine propellant but I don't want two different loads that look physically the same but shoot to two different points-of-impact.

Zuckerberg
I am a rich man when I can feel pity for a billionaire.

I feel sorry for the guy. It never occurred to him that the crowd would turn on him. He is the only guy in Silicon Valley that showed any backbone when it came to censoring hate-speech.

Sure, there was some censoring on Facebook and the execution was crap. Maybe that is why Mr Zuckerberg resisted. He knows that human intervention is fallible...and expensive.

I believe that if Mr Zuckerberg wanted to drink an adult beverage with me, that I would not spit in his face. Not an opinion I share regarding most of our would-be masters.

Words
What is the attraction of the words "horrid" and "wonderous"?

Is something more repulsive if it is "horrid" rather than "horrible"?

Is something more awe-inspiring if it is "wonderous" rather than "wonderful"?

I am open to suggestions. Maybe I have been using "wonderful" and "horrible" wrong. Perhaps "horrid" and "wonderous" are the preferred forms when modifying verbs or some such. If I have been in error, please let me know.
Posted by Eaton Rapids Joe at 6:58 AM