Thinking about pedestrians getting hit by vehicles

This post does a qualitative exploration of the reasons why this is so. Then based on those findings, I will explore what changes might be made to enhance motor vehicles to improve pedestrian survival rates for all vehicles.

Link, video pre-scrolled to 48 second mark. Watch until the 0:59 mark. The video shows a skiier jumping off a 50 foot cliff near Jackson Hole from two different views.

The question that is germane to the discussion regarding pedestrian-vehicles collisions is "Why wasn't he squashed like a bug?"

The primary reason is that the landing spot was close to parallel with his trajectory and he experienced a very small change in his velocity. Since energy is proportional to the square of the velocity, this is a very big deal.

Compare that to an object that impacts a surface that is perpendicular to the trajectory. The change of velocity is not just the impact velocity but the (impact velocity + the bounce velocity). The energy that must be managed when you are hit by a vehicle that is traveling 30 mph and you rebound off the front of the vehicle at an additional 6 mph is 44% higher than if you had hit the front of the vehicle and "stuck".

Intuitively, we might sense that a shorter person is at higher risk than a taller person in one of these accidents. A collision might break the legs of a tall person but it might impact the thoracic region of short person.

Why not use 10th percentile or 5th percentile? Well, because the average height is the most statistically stable and we already put our thumb on the scale by picking the smallest-statured subset. 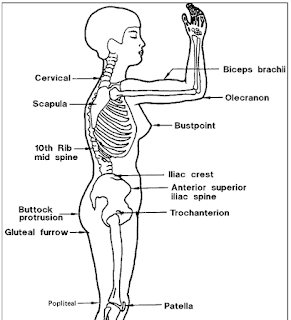 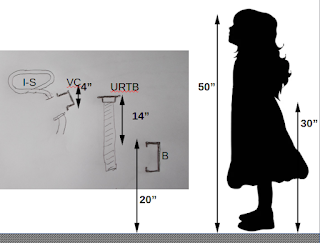 This is how a typical passenger vehicle lines up against the child we want to survive.

The bumper-bar is designated with the letter B.  Federal Motor Vehicle Safety Standard 581 specifies that the bumper provide protection between 16" and 20" so the height of the top of the bumper bar is pretty much dictated by Federal law.

The Upper-Radiator-Tie-Bar is identified by the letters URTB. The URTB holds the two motor rails together and not only holds the radiator in place but is important for ride-and-handling, crash structure performance and reacting the loads from the hood-latch. As can be seen from this simple section...an overly high URTB is likely to be sub-optimal for the survival of a short person.

VC is the valve-cover of the engine. That is the next hardpoint that is likely to be supporting the hood as the pedestrian skates rearward, slip-and-slide fashion.

The Induction System is identified with the letters IS. While it looks tall, modern practice has them made of plastic and they are thin-walled so they are spongy when subjected to loads the magnitude of a collision.

The major take-home from a qualitative, non-math discussion of the problem, it becomes clear that the height of the upper-radiator-tie-bar dominates the survivability of the short pedestrian.

Survivability improves if the driver is on dry pavement and has time to hit the brakes. The front of the vehicle pitches downward and lowers the relative height of the URTB.

The actual shape of the tie-bar can mitigate its impact (pun intended). More favorable outcomes are likely to result if the leading edge droops downward and presents a friendly, sloping surface rather than a sharp, pinch-weld flange.

There may be advantages to moving the URTB aftward, behind the radiator if it moves it to closer in line to the plane defined by the top of the front bumper-bar and the valve-cover of the engine.

One elegant way to achieve lowering the URTB is to tilt the top of the radiator rearward.

It is worth noting that most of the cooling from a radiator happens in the bottom third of the radiator with small-grilled "bottom breather" front ends. Recirculation of cooling air is a major concern with small-grilled designs when the vehicle has no forward motion and there is no breeze. 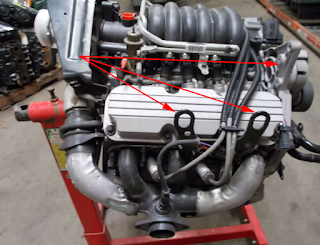 Various details on the engine can contribute to less-than-optimal performance. The red arrows point to a cast-aluminum accessory mounting bracket and at two engine lift "eyes" respectively.

Light duty trucks and adults have a similar relationship, height-wise as passenger vehicles and short people. All of the same physics apply.

Note: The "smart kids" (Dilip, Donna, Grant, Henry, Sastry, Tzeng and Xiao Pei) sometimes let me sit with them at lunch. I am really not all that smart. I am just reasonably good at remembering things.