Mrs ERJ has many super-powers. Foremost among them the ability to be fully invested in the person she is with. 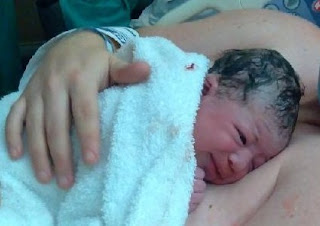 We were talking at 9:05 yesterday morning when she said, "Gotta run. I am getting a call" and then she went dark. I got a text at 8:57 PM "Baby is here. Both mother and baby are beautiful".

Amen, amen, I say to you, you will weep and mourn, while the world rejoices; you will grieve, but your grief will become joy.

When a woman is in labor, she is in anguish because her hour has arrived; but when she has given birth to a child, she no longer remembers the pain because of her joy that a child has been born into the world.

So you also are now in anguish. But I will see you again, and your hearts will rejoice, and no one will take your joy away from you.  John 16:20-22

As long as we are on the topic of super-powers

400 feet to graft a persimmon. This was significantly easier than the mulberries the day before. For one thing, I did not need to traverse the ruts left by the tractor when moving bales of hay across muddy ground nor did I have soft garden soil to deal with. Also, nobody drove up the driveway with a Duramax while I was grafting.

800 feet round-trip from vehicle to visit mom and feed her lunch and back to vehicle. I was on my feet for about 90 minute of the two hour visit.

1600 feet to visit Walmart and buy a tick- collar for Zeus.

The most difficult part of the entire adventure was getting back into the vehicle in the Walmart parking lot. There was a parking place close to the door but the person who parked next to it crowded the line. So I also crowded the line. I was next to the cart corral so I wasn't too worried about pissing off any other drivers. What I did not anticipate was the difficulty of snaking my walking cast back up into the vehicle when I was only able to partially open the door.

Note to self: Don't do that again.

I got home and took a three hour nap.

OldNFO and Lawdog briefly touched on Signal-Intel on their most recent pod-cast.

The downsides from the standpoint of the people collecting information is that it is completely blind to people who do not participate on the internet and whose friends do not participate on the internet. It is also vulnerable to filter-clogging, that is, being overwhelmed with key-word hits and images that are decoys (chaff). Enough hits trigger a human look-see and humans are not cheap, not cheap, not cheap.

Another weakness of automated signal intelligence is that it is blind to context, sarcasm, body language and tone. Human Resources types tell us that less than 20% of the information in face-to-face communication is captured by a transcript.

Given the likelihood of "Red Flag Laws" I expect my blog will get noticed. I hate to disappoint visitors.

Administrative note: Blogging will be a little bit lighter than usual for these last few days of May.