A day of rest

I even bumped into the fellow who owned the vehicle. That is one of the joys of moving at a snail's pace.

We chatted a little while. He gave me his card. 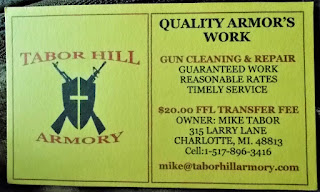 I asked him if he was swamped with work.

"I am working steady but can always use more work" he replied.

I asked him what kind of work he liked best. He seemed to be at a loss to answer the question. I helped him along by mentioning some gunsmiths seemed to enjoy building "race guns" or high-tech guns or African guns with $2000, figured wooden stocks.

His reply was "I like working on everything. The gun I have on my bench right now is a break-open shotgun that is rusted shut. The guy who brought it to me wants it restored to working order."

"A lot of guns out there that the owner might disassembled to clean and couldn't get it put back together or maybe a little spring went flying. Sometimes it is a safety that won't stay in detent. I just get joy out of taking paperweights and returning them to working tools" Mike said.

I haven't seen any of his work but he has been "schooling
" for 12 years and went to gunsmithing about three years ago after his wife passed on. The work helped him focus and pulled him out of his funk.

Much interest in motor vehicle accidents in the comments

One of the options in extracting the data is to pull it out based on how urbanized the environment. I suspect the data is confounded and some of the data is where the accident occurred and maybe other data is the location of the hospital where the victim was pronounced dead.

If you look at age 30 (on the X-axis), from lesser-to-greater death-rate the degree of urbanization is in the order:

No huge surprises but something unusual does happen from ages 19-to-22, inclusive (circled in red). Traces for Large Fringe Metro, Medium Metro and Small Metro which have robust separation at every other age are stepping on each other in that four year span.

Large Central Metro is not in the mix. Economics (cost of insurance, cost to park the vehicle) probably keep many inner city kids out of the driver's seat.

But the next three levels of urbanization are right on top of each other.

That suggests that some common cultural "thing" is transcends the economics and mean-distances of driving. Maybe it is a legacy of the Fast-and-Furious and Smokey and the Bandit franchises. Maybe it is the heady feeling of being a newly-minted adult as yet unfettered by family or responsibilities. 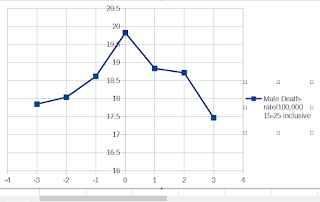 California, Colorado, Massachusetts, Oregon and Washington states all legalized recreational marijuana back in the 'teens. The chart shown above is the combined mortality rate (per 100,000) of men ages 15-through-25 from those states due to motor-vehicle accidents from those states.

The only thing that is quirky about this chart is that "zero" on the X-axis is the year recreational marijuana was legalized. -1 is the year before and 1 is the year after and so on.

If I were to draw two conclusions they would be that naive populations see a 10% jump (from-18-to-20%) in mortality rates when recreational weed is legalized.

The second conclusion is that the advertising campaigns of the Cannabis industry to discourage driving while under the influence are effective but take a few years to reach all consumers.

Why didn't I use more states? Because everything got weird in 2020 due to Covid and those were the large states that made the change soon enough that I could grab 3 years past the change and not get data polluted that was polluted by Covid.

If you want to have me pull data for anything special (Alaska and Montana or Texas) I will probably do it. Just ask for what you want in the comments section. Please remember that data gets noisier as it is sliced into thinner and thinner sections.

A day of rest

I made it to church today. I was deeply touched by the privilege of being able to spend time with fellow worshipers.

As I was walking into church one of Mrs ERJ's friends said "Joe...your backside is showing. May I have your permission to pull your shirt down?"

I was wearing a fanny pack and the shirt had ridden up and I had not noticed it was breezy back there.

"Please, Angelica. Mrs ERJ would be mortified to have me walking in public looking like a hobo."

I think it made Miss Angelica's day to save Mrs ERJ from embarrassment.

I did not get the garden planted. Maybe tomorrow.

I am glad Mrs ERJ is in Miami

Apparently things are hopping down there and it has been a blessing for Southern Belle to have one more able-bodied adult on-deck.

Carrying any significant quantity of water when using a walker is an exercise in frustration. Tomorrow I will try strapping a couple of gallon milk jugs together and throwing them over one of the bars of the walker saddle-bag style.

My younger sister is both a nurse (Yeah!) and had one of her knees replaced.

The surgeon told her that it is almost impossible to insert the new parts without cutting a little bit of the sheathing that stabilizes the knee and it might take up to six months for the other fibers in the sheathing to pick-up the slack.

My sister told me that the tent-stake that was installed in my tibia undoubtedly took the same path as her new knee.

That would explain the pain below my knee-cap when attempting to lift my leg when it is horizontal or to straighten my knee under the same circumstances.

The other bit of evidence that supports that hypothesis is the first time I lift it the pain is sharp but the next 19 lifts are virtually pain free. It is as if my brain has sorted out which nerve impulses to fire to avoid contracting damaged muscles.

Six months is a heck of a long time but I think it could be much shorter than that if I work on my leg-lifts and knee-bends when lying on my bed. It is a matter of training my brain and strengthening the other muscle fibers in the compromised sheaths of muscle.