Offered for entertainment purposes only: My thoughts on riots

We have been around a year or two. We might know something about riots 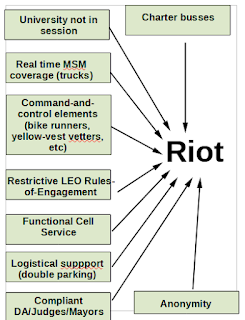 The chart shown above depicts some of the key enablers for a modern riot in America.

Some of the enablers are not things we can do anything about, like University being in session. But it can advise us to avoid medium sized cities (like Mount Pleasant, Michigan) if it hosts a University. It can also provide guidance regarding when things are likely to heat up.

Other enablers are far more interesting, like the MSM up-link trucks. The range of actions are a spectrum from totally passive to very active.

For example, if a protest is starting to build steam and you see a newsie truck pull up, it is past time to get-out-of-Dodge. It is irrelevant that the truck was responding to a tip or if it showed up out of anticipation or its arrival was coordinated by the soon-to-be rioters a week ahead of time. Fact is, newsie truck + Demonstration has gasoline-meets-fire potential.

An action that is slightly more active than using your eyes would be to bless all of the local newsie trucks with Apple Air-tags so you can keep track of them in real-time. Now wouldn't that be handy?

On the more active end of the spectrum one could recruit local athletes to pummel the newsie trucks with dozens of water balloons and water bottles. As far as I know, this is just a misdemeanor. If this happened on a regular basis, the techs and drivers would eventually figure out that it was just a matter of time before the liquid in the projectiles MIGHT someday be more flammable than H2O. Flammable fluid plus high voltage is not pretty. They might opt to have sick-outs on days when riots are scheduled and take this enabler out-of-play for our side. 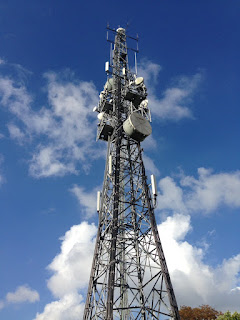 Cell phone coverage is trickier. Interfering with over-the-air transmissions is a Federal crime. However, I believe it is only a misdemeanor if a garbage bag filled with used grocery bags fell out of the back of your pickup and the grocery bags were carried by the wind to the power-feeds at the base of cell phone towers where they would be sucked up by the cooling air intakes causing the amplifiers to temporarily over-heat.

I only point this out because I would hate to have this accidentally happen.

This video is interesting because you can see both the logistical elements as supplies are off-loaded from vehicles (1:25 mark) that are double-parked on the street and you can see command-and-control deployment as men (helpfully wearing high-visibility, yellow clothing) vet people showing up (1:50). Look at how the teams of two-men-each are posted at the sidewalks feeding protestors to the site of the protest. Pretty obvious when you know what you are looking for. By extension, the other people wearing hi-vis are also likely to be command-and-control elements.

One could guestimate the planned scope of the riot planned by the goblins based on the number of vehicles offloading supplies and make your own plans accordingly.

You only need to watch three minutes of the video to see this....if you are looking for it. I am not promulgating any mischief but it is easy to see that the protest/riot would fall apart if the supply vehicles experienced sudden deflation syndrome and the thugs in the yellow suits became uncomfortable.

Geofencing can be your friend. Send them a coupon you know they will want to redeem and they will stand up and identify themselves. If the coupon was for a free download of a desirable and expensive app, one could potentially sneak in an app or two that could be useful to peace-loving citizens or extremely awkward to explain...like certain kinds of images and videos.