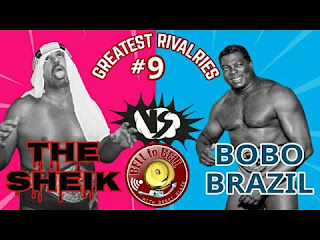 Growing up in Lansing, Michigan, Big Time Wrestling was a TV staple.

The Sheik and Bobo Brazil traded off on being "World Champ-een" on a monthly basis.

Every week they folded, mutilated, spindled, ruptured spleens and broke each other's arms. Obviously, people were tougher back then and healed more quickly.

It was 95% theater. Sometimes they would goof up and actually hurt the other person and one of them might get mad and go off-script.

But the back-and-forth was for show and drama and audience. 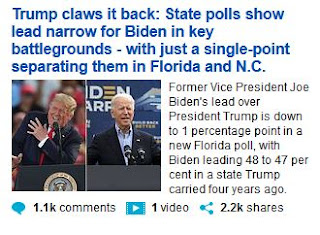 What if the major news outlets, the ones that sell advertising air time, simply rolled dice to create the illusion of a fiercely contested  battle on a state-by-state basis. What if the lead traded hands on a regular basis?

Might that increase the number of viewers? Might it cause the rival parties to open their coffers and spend more money on advertising with the outlets that performed the poll?

AND...for your viewing enjoyment, I created this computer animation simulating the various polls of the Trump-Biden race. Pay no attention to the commentators.