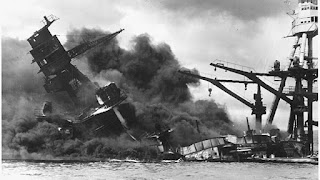 As you come and go through the narthex area of the church at St. Mary (that’s the part of the church that connects the main body of the church to the gathering space) you walk right by a placard that memorializes a young man by the name of Francis Flaherty. Francis was born in 1919, grew up in Charlotte, attended St. Mary with his family, graduated from Charlotte High School, attended the University of Michigan, and enlisted in the Naval Reserve. He hoped eventually to enroll in medical school to become a physician. 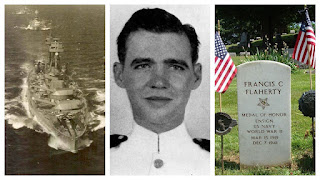 Francis was a young lieutenant aboard the battleship USS Oklahoma on December 7, 1941. The Oklahoma took a number of direct hits from Japanese torpedo bombers during the attack on Pearl Harbor. Francis was stationed in one of the battleship’s gun turrets. As the ship was capsizing in the shallow waters of Pearl Harbor, Francis grabbed a flashlight and stayed at his post, using the light of the flashlight to lead his crewmates to safety. Even as the turret filled with water, Francis pushed his men toward an exit and safety. Francis had several opportunities to escape and save his life, but he remained at his post, more concerned about the lives of others rather than his own. Francis lost his life that day at the young age of 22, but saved the lives of many. “No greater love is there than this, than to lay down one’s life for one’s friends.” 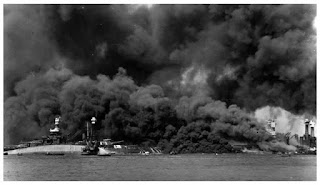 For his bravery, Francis was posthumously awarded the Congressional Medal of Honor, the highest military honor bestowed by the people of our nation. The Oklahoma was eventually righted and a large number of unidentified dead—including Francis—were buried in the military cemetery at Pearl Harbor. With advances in DNA identification technologies, efforts have been underway to posi-tively identify those who previously were buried in graves marked “Unknown”.

I recently received notice that the remains of Francis Flaherty have been positively identified. As of now, I am unsure if there are any members of Francis’ family still here in the Charlotte area. My current understanding is that the plan is to return Francis’ remains for burial in Maple Hill Cemetery, hopefully in conjunction with Memorial Day. I will keep you posted. Francis is one of only 13 World War II Medal of Honor recipients in Michigan. There is a military memorial to him both at the old courthouse as well as in Maple Hill Cemetery. He is a hometown hero, member of our parish, and someone whose story I thought you should know.

Note from Joe: Please pass the word to any of Francis Flaherty's family who might not be aware his remains have been identified.