Arrested physical and behavioral growth an adaptation to hive-life? 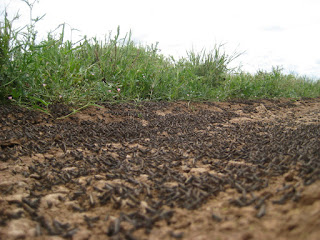 Locust were one of the plagues in the Bible. They are still with us.

Scientists determined that some types of grasshoppers morp into locust when a certain population density is reached. The grasshopper-to-grasshopper contact releases neurotransmitters (serotonin being one of the important ones).

Locusts belong to the grasshopper family but unlike their harmless relatives they have the unusual ability to live in either a solitary or a gregarious state, with the genetic instructions for both packaged within a single genome.

Locusts originate from barren regions that see only occasional transient rainfalls. While unforgiving conditions prevail, locusts eke out a living as solitary individuals with a strong aversion to mingling with other locusts. When the rains come, the amount and quality of vegetation expands and the locusts can breed in large numbers.

In deserts, however, the rains are not sustained and food soon becomes more and more sparse. Thus large numbers of locusts are funnelled into dwindling patches of remaining vegetation where they are forced into close contact with each other. This crowding triggers a dramatic and rapid change in the locusts' behaviour: they become very mobile and they actively seek the company of other locusts. This new behaviour keeps the crowd together while the insects acquire distinctly different colours and large muscles that equip them for prolonged flights in swarms.      Source

This is very speculative, but I wonder if humans have that same kind of plasticity. We certainly see very different behaviors in crowded environments.

There are also physical changes that have been difficult to explain. For one thing, the lower human jaw has been shrinking and there has not been enough selection pressure (that is, enough mortality due to large lower jaws) for it to be attributable to genetic shift.

Could humans possess the inherent flexibility in our genetic hard-wiring to morp into hive-dwellers when packed together?

Where I am going with this is that smaller lower jaws are linked to pre-adulthood. The jaws need to elongate to receive wisdom teeth. Maybe the hard-wiring arrests the maturation process so the hive-dwellers are in a perpetual state of arrested development...say the level of a fifth-to-eighth grader for many attributes.