It is called "Fishing" not "Catching" for a reason

I think lower water temperatures were a factor. I gave the Kid an assignment, to use the power of the internet to see what was biting, where they were being caught and what folks were using for bait.

It looks like we have a standing Wednesday fishing date. It will be interesting to see if he sticks with it if we don't catch fish.

We need to work on his clothing. He was wearing crocs, shorts and a tee-shirt. It was 53F at three this afternoon. He stuck it out till 6, though. 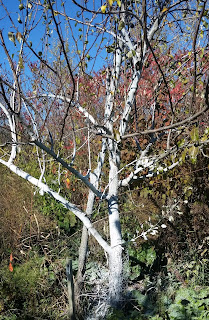 I am going to "flip" most of my Shenandoah pear trees over to Asian pears, probably Korean Giant.

Shenandoah is vulnerable to sun-scald. That is where the sun thaws the bark in the day and then it freezes at night. I don't know why Shenandoah is so much more vulnerable than any other variety.

Painting the bark white reduces the likelihood of the sun thawing out the bark. It also reduces the emissivity so they freeze more slowly since they are less efficient at radiating heat

I like Asian pears, especially the later varieties. They have a very long period where they are ripe but still hang on the tree.

I am lichen it 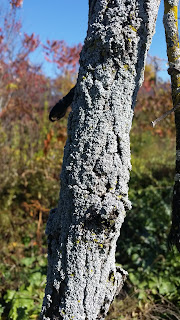 I want to get lichens growing on the flags we put beneath the eves.

Many researchers now believe that lichens are a symbiotic relationship between three species. My plan is to crumble up the old bark and rub it into the tops of the flags.

Yeah, I am retired. Why do you ask?

Urea crystals in the bottom of a bucket 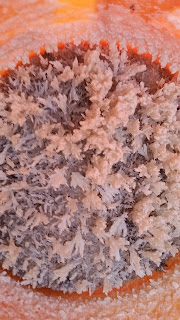 I left a bucket with about a 1/2" of urea prills outside. Of course it rained.

Then I stuck it in the barn where I forgot about it.

You heard of crystal meth...this is crystal piss.

At the grocery store 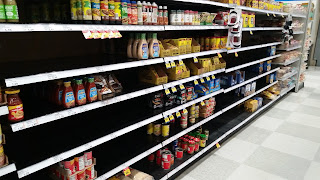 The only category that was hammered was the Mexican food. Everything else was fully stocked.

Maybe it was a supplier or distributor related issue.