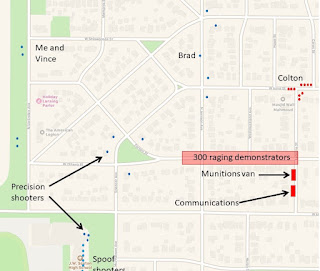 The demonstrators broke the Do Not Enter tape strung across Ottawa street just west of Jenison.

They only came one-quarter the way down the block toward Spencer Avenue.. They were still a full 450 feet from Spencer when the leading edge stopped.

That is when the speachifying amped up. Then, as the chopper was flying overhead, the demonstrators started putting rolled up strings of fire-crackers in ball chuckers and pitching them in the direction of the Spencer Avenue defenses.

They were trying to provoke the defenders into shooting.

As the second string was detonating, Alex called Brad. “OK, time to send the decoys our way.”

Brad called out to the closest of the ten elderly people standing in the middle of Ionia Street, the road immediately north of Ottawa. “Time for you to go.”

The ten old men and women made their best time down the middle of Spencer to support the scanty forces arrayed to resist and throw back the demonstrators.

Up in the chopper, Bryce Cunningham watched the fighters desert their posts at the west end of Ionia. The ten fighters showed up as “hot spots” against the 32 degree pavement in Bryce’s infrared monitor.

Bryce radioed down to Michelle Scroom, aka Mitch-Bitch that the back-door was open. 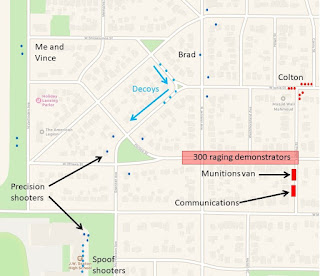 Even as Bryce was talking to Scroom, his monitors for IR (infrared) and NIR (near-infrared) went white as Alex's fireflies turned on their NIR spotlights and pointed them toward the chopper. They aimed the spotlights by means of a video camera mounted to the light and monitor. They knew they were painting the chopper if they kept the chopper in the box in the middle of the monitor's screen.

Mitch-Bitch radioed Colton that it was “Go time”.

Colton told his fighters to un-ass themselves. It was time to leave the corner of Lahoma and Ionia and insert themselves behind the Spencer Avenue defenders.

Colton took the precaution of leaving two of his fighters to guard the intersection of Lahoma and Ionia. Colton wasn’t born yesterday. He left the two most excitable fighters. That is, the ones he least trusted with loaded guns in close proximity to his own, precious hide.

Colton broke the remaining 24 men into three teams. The least competent team was tasked with lugging equipment and were given the middle of the street.

The second most competent fighters were given the south side of Ionia Street to move along.

The third team was the one Colton embedded himself within and they took the north side of Ionia.

The luggers had to weave between downed trees and push through branches.

The teams moving up the sides of the street stayed close to the houses and leap-frogged, first one side moved, then the other.

A man walking at a normal pace cranks out about five feet per second.

In aggregate, the three teams were moving slightly slower than one-foot-per second.

Johnny and Drew heard the aggressors well before they were in the kill-zone. "Hey Brad, we got company coming our way."

Brad had been floating between Shiawassee street and Ionia street, ready to support either fire-team. Both approaches had identical setups and, in fact, there was nothing that guaranteed that the aggressors wouldn't planning to use both of them.

Things were going to get exciting in just a few more seconds….

I had been surprised that Brad, Darryl and Alex were so worried about being “in the right” before opening up on the demonstrators. *

As far as I was concerned, they had shown their colors when burning down my Mother’s house.

Brad explained later that Alex had to win at three different levels.

The defenders had to win at the physical “defend the neighborhood level”. I was good with that.

The defenders also had to win in the court-of-public-opinion. Whether the defenders were legally justified or not was irrelevant if it looked bad on TV.

Finally, the defenders needed to be able to defend their actions in a potentially hostile court.

It wasn’t enough to funnel the aggressors into the perfect kill-sack and have Brad’s tiny force kill all of them. Brad had to be totally and obviously be in-the-right when he dropped the hammer-of-God on them.

The oncoming aggressors did not hear the small Honda generator running in a nearby basement. The power-cord fed out through an open window and then down three runs of 14 gauge Romex laid on the ground.

When Brad judged them to be perfectly in the kill-sack, he yanked the cord that held the pop-up target level to the ground.

The man-shaped target popped up ten yards in front of the group coming up the center of the street. Brad then spoke sternly into the microphone “Halt! Who goes there?” which played out through the speaker near the pop-up’s pivot.

Predictably, the group in the road dropped their loads, shouldered their weapons and every man-jack of them emptied their magazines at the pop-up.

Brad then activated a switch which started the detonation of the string of firecrackers behind the pop-up which remained standing in spite of being riddled with bullet holes.

The two groups that were working their way up the sides of the street dived into between the houses for cover at the sound of the popup's challenge. The more aggressive among them peeked around the corner of the house to see what the guys in the street were shooting at.

That is when Brad flipped on the lights.

One-hundred-twenty-thousand lumens of bright-white light smoked the aggressor’s retinas as they looked directly into the six lamps normally used to illuminate parking lots.

This was one of the riskier parts of the venture for Brad’s force. Brad's forces had their eyes closed.

Brad turned the light off after one full “One-Mississippi”.

Then Brad flipped the cover off the second switch and activated the Claymore mines that had been planted between the houses.

Everybody in the internet will tell you that it is impossible to replicate the standard, US Military Claymore mine with commercially available materials.

They are absolutely right. But Brad didn’t have the same constraints that shaped the Claymore.

For example, they didn’t need to be compact enough so five of them easily fit in a backpack.

Once Brad made the decision to package the improvised Claymores in five-gallon buckets, it was a piece of cake to not only match the Claymore’s performance but to exceed it.

The switch that Brad pressed closed relays up-and-down the line. In addition to the relays, every Claymore had a motion-activated IR sensor “borrowed” from the kind of inexpensive security lights available at every big-box store.

If the IR sensor had seen motion in the past 12 seconds, then the Claymore detonated milliseconds after the relay closed.

It was like ground-sluicing rafts of sleeping ducks. The two elite teams that had taken shelter between the houses were shredded.

The team standing in the middle of the street had empty magazines and were blindly fumbling to reload.

Brad, Johnny and Drew mowed them down. The M-855 ammo made short work of their “bullet-proof” vests without the chicken plates.

Each aggressor got three-tapped. Two the the chest and one to the head. The night-vision captured the video of the aggressors attempting to reload and return fire as they were mowed down.

A couple of the men were runners. The IR sensor on the Claymore between the next set of houses east of the kill-zone saw them as they ran by and detonated.

Colton was beaned in the head with a half-inch, Grade 8 nut traveling at a pedestrian 2000 feet per second. The fancy electronic hearing muffs did nothing to protect Colton’s head. The other man took a couple of nuts to the chest.

The entire encounter was captured on security cams. The segment where aggressors started shooting at the pop-up was recorded from four different camera angles. Gary immediately uploaded it to the channel. Gary also uploaded the footage captured by the nightvision scopes.

Fifteen seconds into the engagement it was Defenders 24, Aggressors 0.

* A big tip-of-the-hat to Windham at ammo.com for his pointing out that members of the military, active and retired, will not shoot U.S. civilians.

In any large group of people, there will be a small percentage who are unhinged.

In the case of Brad and Darryl's force, the aggressors had to be unmasked and forced to declare the fact that they represent a clear and imminent threat to innocent people.

A sentry challenging unknown people in the night qualifies as innocent.

Hence the use of the pop-up target.