What do you call a dog with no legs?

What do you call a dog with no legs?

It doesn't matter what you call him. He won't come anyway.

I was walking in the neighborhood around mom's house when I was struck by the number of houses that sported both Biden signs and signs advising passers-by that the home was "protected" by a security company.

Should the extreme left wing of the Democratic party complete their metastacizing of the Dems, those homes will be able to economize by cancelling their security contracts.

Why pay to have an electronic security company watch your house? They don't actually guard it. They pass the alarms to the cops.

No cops, no point in a security company.

Expect sales of chain-link fences to go through the roof.

Two years from now, expect kids getting their faces ripped off by large, in-bred, bored, poorly-trained dogs to be a weekly occurrence.

Expect that to be the "progress" of the Progressives.

A few months earlier, I posted about "Community Policing". There was some follow-up regarding the dearth of people willing to be Parole Officers.

Pawpaw pointed out that Corrections Departments have no problem hiring Social Workers to be Parole Officers. They cannot just walk into the job. They need additional training.

But, by-and-large, Social Workers haven't shown much willingness to apply for jobs as Parole Officers. That is a bit of a mystery because there are more Social Workers than jobs. 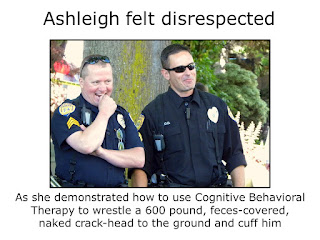 So it begs the question: Will there be enough Social Workers willing to do the work formerly done by the police? Or, do the Progressives intend to force the Social Workers into the Policing? Maybe they will make Policing a mandatory, ten-year internship for Social Workers or perhaps a mandatory 500 hours per year of continuing education to retain their license.

Posted by Eaton Rapids Joe at 7:19 AM